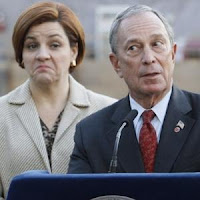 Thought experiment: Victims of a Central American earthquake have no hope of eating without international food assistance. The agency at the scene fingerprints aid recipients for tracking purposes. How many victims would turn down life-sustaining food because they don’t want to be “stigmatized” by fingerprinting? None.

The chances that New Yorkers in straitened circumstances would forgo a stream of free food because of a finger-imaging requirement are equally low. New York’s food-stamp rolls have jumped 50 percent in the last three years; 1.8 million New Yorkers now use food stamps, at a cost to federal taxpayers of $3.3 billion.

The only potential recipients who might be deterred from applying are criminals with outstanding warrants against them, who worry that the police will track them down if they give the welfare agency their prints. But even that fear would be misguided. The Human Resources Administration, which runs the program, doesn’t share the prints with any other government agencies — neither the police nor federal immigration authorities. If fugitives are inhibited from eating for free at taxpayer expense, that’s a cost we can live with.

Perhaps Berg should sue the city for subjecting its employees to what he refers to as “electronic stop-and-frisk.” All city hires, from agency commissioners to janitors, have their fingerprints taken as a condition of employment. The welfare workers who administer this allegedly “punitive” food-stamp requirement have all been finger-imaged. The deterrent effect appears to be minimal. At 275,000 full-time employees, city government dwarfs all other local employers.

Quinn, The New York Times and other welfare activists imply that no one would ever try to game the welfare system. In fact, food-stamp fraud was a major problem in the Dinkins era, before the finger-imaging reform. Even with the requirement, the city discovers 1,200 to 1,500 applicants a year who are already collecting food stamps, for a total in benefits of about $5 million a year. Thousands more potential fraudsters are undoubtedly not reapplying because of the integrity measures.
Posted by Queens Crapper at 12:48 AM

Once again our city's for sale
to the highest bidder.

GOD HELP US if Ms. Lez B. Quim gets elected mayor.

GOD HELP US if that shining example of political mediocrity, Scot Stringer becomes our next mayor.

The only potential recipients who might be deterred from applying are wanted criminals AND ILLEGALS!

Looks like Quimm is doing some butt sniffing, eh?

Of course food stamp rolls are up. It's because lots of people with jobs still qualify for them. That's what happens when we allow major corporations to pay close to minimum wage for part time only positions with no benefits.

NYS ,because of progressives like Quinn, will soon be financially bankrupt as California is now. Illegal aliens free lunches, from Mexico ,and outrageous union pensions are are UNSUSTAINABLE.

my cousin ,a small business employer of 25, tells me that 2008 to the present is the worst economic downturn in 32 years.her business is so bad,and layoffs so great, that all of her employees have lost their homes.

she was a liberal, but will only vote conservative /g.o.p.. no liberal/ progressives need apply in her city.

Anyone on public assistance needs to be fingerprinted. No fingerprints - no food stamps or free housing.

"my cousin ,a small business employer of 25, tells me that 2008 to the present is the worst economic downturn in 32 year"

-And:
"she was a liberal, but will only vote conservative /g.o.p.. no liberal/ progressives need apply in her city."

Well, aside from your checkered history of falsehoods, it gives me pleasure to entertain these whoppers.

Suspending my disbelief, this current recession is bad...who caused it...well exactly who was in the White House in 2008? =Bush

Who was responsible for repealing a law that our grandfathers had the wisdom to pass during the last capitalist fiasco aka:Great Depression? Why, that would be a -republican Congress- aided by Clinton.

And no, I don't believe a word you wrote.

Quinn....
always behind Bloomberg....
ready to kiss his ass!

He must have cut the cheese....
judging from the expression on
her face!

Oh well....
it comes with the territory.

Get the facts straight. The Great Depression was not a capitalist fiasco. It was caused by government intervention: the Smoot-Hawley Tariff.

Just as the current malaise was also caused by government intervention: Bring us the head of Andrew Cuomo.

clicking to the link "bring us the head of Andrew Cuomo " of #9, George The A. is MUST READ.

it is a reseach paper done by Wayne Barrett ,8/5/2008,"Andrew Cuomo AND FANNIE AND FREDDIE "

during Cuomo's 1997 to 2001 leadership at H.U.D,it granted $3.5 MILLION to Tides foundation and Center,according to this report.

"georgetheatheist said...
Get the facts straight."

No George, this isn't some dumb AM radio talk show with an audience of frustrated idiots.

By linking to the Wiki article about Smoot-Hawley you actually made my point.

The initial market collapse was the result of a typical get-rich-quick capitalist bubble.

Smoot-Hawley was promulgated by Hoover, voted in on a near straight republican party line.

I'll leave it to readers to peruse the article and discover the facts...But you haven't snowed anyone...this aint Bob Gigante's mook-fest.

As for your parroting of the typical con-servative's line on Cuomo -really, do you expect any intelligent person who is appraised of the facts to fall for that.

You'd better cherish Cuomo. He's the closest thing to a republi-crat this State is likely to see again. The demo's, they are a-changin.

Cuomo, The Clinton Administration's Housing Secretary, knows he's guilty as sin for causing the economic mess that -some might argue - the world is experiencing. He's adroitly covering his ass with this new "conservative" schtick right now. But he doesn't fool Queens Crap readers - except maybe you.

Smoot, Hawley, and Hoover didn't know their economic asses from their elbows. They were the original Rino-Republicans. Ur-Rinos. Protectionists not free marketeers.

Fact: "All the evils, abuses, and iniquities, popularly ascribed to businessmen and to capitalism, were not caused by an unregulated economy or by a free market, but by government intervention into the economy." - Ayn Rand, Capitalism. The Unkown Ideal.

I have known of people who got on stamps even when they could have done without because "why not? its free"

They got them simply because it was easy, and they could.

Thats a few extra hundred a month to go to XBOX games and dinner out at Applebees every friday night.

"Smoot, Hawley, and Hoover didn't know their economic asses from their elbows.'

Come off it 'George' these two were sponsoring that legislation at the behest of -industry- and it passed on a party-line vote.

As for that whackjob Ayn Rand even her last surviving protege Alan Greenspan conceded those precepts were wrong:
http://www.nytimes.com/2008/10/24/business/economy/24panel.html?_r=1&oref=slogin&pagewanted=print

May i suggest more credible reading:

At the behest of CRONY so-called "capitalists". They weren't free marketeers.

As for Alan Greenspan. He left the Objectivist movement years and years ago. No Randian he.

Extra, extra. Read all about it! Alan Greenspan repudiates Ayn Rand by his actions as Fed Chair!

You can read it on the Welfare line . But hurry. You're up-next number is blinking on the board.