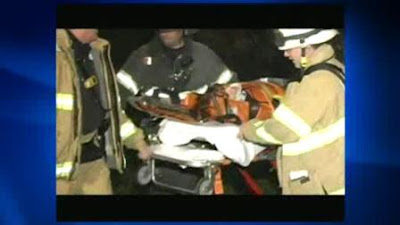 A teenage girl was rescued by NYFD firefighters after falling through an open storm drain inside a Queens park on Friday night, A Walk In The Park has learned.

Amber Thom, 16, a student at Arch Bishop Malloy High School was walking with five friends in a wooded area inside Kissena Park near Underhill Avenue and 168th Street in Auburndale about 10:30 p.m. when she fell through an open storm drain, according to NYFD officials.

The girl was walking on a log when she slipped and fell approximately 15 feet straight down through an open man hole cover.

Friends climbed down the drain to help her but were unable to move her. Friends called 911 at 10:35pm.

Engine 299 arrived first at the scene within five minutes. Within 20 minutes Thom was lifted out of the hole by firefighters. By 11:21pm Thorn and two friends had been removed from the sewer drain. The teen was taken to Long Island Jewish hospital where she was treated for a broken leg.

The manhole cover was found beside the opening. According to neighbors teenage kids often gather in the remote area of the park and sometimes explore the underground storm drains.

Screenshot from Eyewitness News.
Posted by Queens Crapper at 12:44 AM

Soon John Liu will be slipping
into a similar hole.

Hopefully he is followed by some other crooked pols we can name.

Ai-yi-yi and oy veh. What a spelling mess.

I'm waiting for the notice of claim against the city for this.

Sounds like she had some explaining to do when she got home.

It's part of neighborhood folklore for a lot of people, but there really are tunnels throughout Kissena and leading west into the World's Fair. Some of them you can drive a truck through. A search of Duncan Kissena park on youtube will bring up an interesting video.

People from the neighborhood and so-called urban explorers have been sneaking into the tunnels for years. They should all be covered up, and if you decide to explore. stay alert and don't fall in an open man hole. And don't go in after it rains. In fact, don't go in at all.

At 16, it makes you wonder what she was doing in the woods at night?

Where is the Police patrols or closing these parks at 7pm for example? Simple ideas is it not?