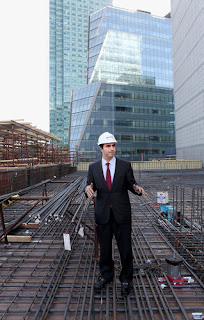 ON a recent afternoon the view across Court Square, in eastern Long Island City, Queens, took in an auto body shop and parking lots, and aging factories beyond. The Citicorp Building and other office towers cast shadows across streets. Places to shop were nonexistent.

That view is about to change. The Rockrose Development Corporation has started construction on a 42-story rental tower with 709 apartments that is expected to be among the largest residential developments in the area — and one of the tallest buildings in the borough — when completed in 2013.

The apartments in the tower, which will be called Linc LIC, at 43-10 Crescent Street, will range from 450-square-foot studios to 1,400-square-foot three-bedrooms. They will have parquet floors and “Rockrose standard” flecked granite counters, and in many cases, washers and dryers, said Justin Elghanayan, a principal of Rockrose, which is led by his father, Henry.

The rents will be about 25 percent below those for comparable apartments in Manhattan, brokers say. They average $1,750 a month, for studios, and $4,150 a month for three-bedrooms, or about $38 per square foot.

“I think it’s about to pop,” Justin Elghanayan said of the Court Square area, as he gave a tour of the work site. Indeed, a bustling after-work social scene will be critical to attracting the younger renters whom Rockrose covets, said Mr. Elghanayan, who for similar reasons staged a sort of multiweekend pool party on a lot near his new building last summer. Called the Palms, the party featured three Dumpsters filled with water to splash around in, alongside beach chairs, and beer. “That’s the kind of energy neighborhoods need,” he said.

Mental note: LIC needs more noise and dumbasses serving liquor without a valid license...
Posted by Queens Crapper at 12:00 AM

a bustling after-work social scene ... the party featured three Dumpsters filled with water to splash around in, alongside beach chairs, and beer. “That’s the kind of energy neighborhoods need,” he said.
--------------

yea .... sure .... Dumpsters will provide real competition toe to toe against Dumbo and Downtown.

Can someone explain something?

1. The economy is about to fall into yet another recession - yet we have money for this.

2. Manhattan has plenty of empty apartments - yet we have money for this.

3. Basic services are being cut and further cuts are threatened - yet we have money for this.

At least "dumpsters filled with water" is not a lame attempt to compare these isolated apartments with Manhattan's social, cultural, culinary, and retail attractions.

What do expect Rockrose to say? We blew millions on a 42-story monster in the wrong place at the wrong time. The reason we built it here because the land was cheap and we had the political connections to do it.

Who, besides a speculator with some hot dollars in their pocket, will plunk down money to buy property in a community that thinks lawn chairs next to a dumpster is real magnet for a hipster and not a gag from a SNL skit.

Ya gotta love Queens. It must be the only place in the world that would take a statement like that seriously.

The boro is so stupid they will stand around while a 50 story building (among many other projects) dumps 1000s more into a transportation system that is already at max.

Well go ahead and stand around every day as a packed #7 train pulls into Hunters Point and try to squeeze on board.

Message to local morons: how will this benefit you? It just siphons tax money into yet another speculator's pocket.

Interesting to compare this thread to the local weekly press and Liquity or LIC Partnership press releases.

Or better yet your politicians gushing praise (on the raise occasions that they take a break from tireless tweeding at the projects, senior program, or gay shelter.)

I'm confused - where do they think all those people will come from? How will they get there?? Car, Train and Bus but the roads are already over taxed. I guess they will have to knock down other places to make room for bigger roadways. #stupid!!

The hipsters go to Greenpoint or Williamsburg.

The yuppies go to Astoria or LIC waterfront.

The priced-out Manhattanites will not rent something on Crescent Street.

No stores. No parks. Nothing but CitiBank and thugs from Queensbridge.