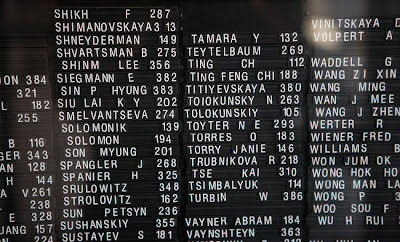 Ms. Goldberg, 98, lives in a 19-story apartment house in Flushing, Queens, one of two neighboring buildings that were erected for survivors of the Holocaust. When she moved there in 1978, she said, her neighbors formed a tight community of predominantly Jewish refugees like her who had fled to the United States from Austria or Germany.

“We had parties,” Ms. Goldberg said, her voice barely above a whisper. “We had card games. It was our people. We had Rosh Hashana and Yom Kippur in our apartment.”

Now, she said, “It’s completely changed — I have no neighbors here.”

For Ms. Goldberg, the transformation has been steady and overwhelming. Of the 326 residents in her building, now only 31 are Holocaust survivors, and only 7 of them are German or Austrian.

The new neighbors are friendly enough. But she said: “We do not talk. We say hello, goodbye. But that’s it. They don’t speak German. They don’t speak English. They speak Russian and Chinese. Sometimes they just shake their heads.”

This is actually a very fascinating article showing how different groups live together and tolerate each others' presence, but don't really know each other. Not only that, but most people aren't interested in knowing each other.
Posted by Queens Crapper at 12:50 AM


I saw him once before,
As he passed by the door,
And again
The pavement stones resound,
As he totters o'er the ground
With his cane.


They say that in his prime,
Ere the pruning-knife of Time
Cut him down,
Not a better man was found
By the Crier on his round
Through the town.


But now he walks the streets,
And he looks at all he meets
Sad and wan,
And he shakes his feeble head,
That it seems as if he said,
"They are gone!"


The mossy marbles rest
On the lips that he has prest
In their bloom,
And the names he loved to hear
Have been carved for many a year
On the tomb.


My grandmamma has said--
Poor old lady, she is dead
Long ago--
That he had a Roman nose,
And his cheek was like a rose
In the snow;


But now his nose is thin,
And it rests upon his chin
Like a staff,
And a crook is in his back,
And a melancholy crack
In his laugh.


I know it is a sin
For me to sit and grin
At him here;
But the old three-cornered hat,
And the breeches, and all that,
Are so queer!


And if I should live to be
The last leaf upon the tree
In the spring,
Let them smile, as I do now,
At the old forsaken bough
Where I cling.

Must we always be reminded of the holocaust everyday?

Norman Finkelsteins: The Holocaust Industry Reflections on the Exploitation of Jewish Suffering is a great read for any Native New Yorker

"We had card games. It was OUR people".

What is the difference if other people move in and it becomes THEIR people.

Same game different players. What is the significance of this article?

Perfect for the politicians. Everyone is their little groups. A dollop of ice cream money here, and photo op there.

No connection with each other, only the machine.

Sort of explains why the country is evolving and Queens is stuck in the 90s.

My neighborhood has changed drastically ,good and bad but I love my neighbor next door they teach me a little Chinese and I tell them all about my Cherokee heritage ;-) They are the best neighbors in the world but always are trying to feed me telling me I'm to skinny ;-) lol We garden together and spend many summer nights just hanging out I'm Christian they are Buddist but we are not just neighbors we took the time to know each other and became friends ;-)

No connection with each other, ONLY THE MACHINE.

Way too true. People are only loyal to their political MASTERS and I put a high emphasis on MASTER(S)

My neghiborhood is changed too. Gone are the middle class clothing shops, the furniture stores, and specialty food markets. In are the nail salons, the Taco Bells, and the 99c stores.

EVERYONE complains about this... it's only that she's Jewish that there aren't a million cries of "Racist" on here.

"Must we always be reminded of the holocaust everyday?"

Must we always be reminded that there are people like you in the world everyday?

If you forget it will happen again.

"They are the best neighbors"

That is rare and you are very lucky.
I have a house on Seneca ave in Ridgewood, the SOB the 2nd door down rented to Mexicans. They are always partying and throwing the garbage out the window down into the yard.
Now rats are around, I cant even sell my house. (and I wont rent to rabbit garbage)
As soon as prospective buyers see these animals they turn around want no part of the house.

i think we should kick out all the non-jews and only allow the chosen ones to live here.

It was the Germans and Italians that immigrated to the United States in the early to mid 20th century. Times were tough in those countries so they came here.

Who will come in 50 years? Who knows. Depends who will be willing to do the manual labor jobs that Americans don't want to do.

Ms. Goldberg is like the rest of the aging European immigrants from the WW II era. She saw her neighborhood turn a 360.

No one speaks German? Only Russian and Chinese?

I wish more would learn English. Its painful to see toddlers who are taught a foreign language over the native tongue. Be bilingual but please be American first. This is the country you've decided to live in.

My grandfather lives in that building. They still hold weekly Shabbat services on the first floor, with the dozen remaining observant men, and six women.

Weren't those buildings built by the developer Zekendorf?

Amazing thing how a Jew can say "our people" they don't speak German or English, wow? If another Caucasian made these comments about the Jews and their parties, every idiot would be calling for the CIA to investigate who the anti-Semite is...

Duh, nobody wants to befriend a sleeper cell.

@Joe said Thats to the south of my home but to the north is another story ;-( a 4 story building with nothing but human waste ;-(

"No neighbor's?" That's not racist?

@ Joe said They are great my neighbors to the south but the building on the other side of my house now that's a whole other story ;-( Human waste ;-( God forgive me but sometimes I wish that Damn thing would just blow up the people are so foul ;-( I know all about those 24/7 parties and the garbage out the Windows ;-( And the lovely piece of CRAP that's dealing and the 109th does nothing ;-(

The CIA should investigate the Masters of Deceit who hold no religion but Communism and pretend to be other things.

did not a few million people in past history run from Stalin's Communist Russia,Mao's Communist China and Kim's Communist North Korea ?

my relative and her family are survivors of the Norwegian TRAITOR ,QUISLING ,who collaborated with the Nazi (NATIONAL SOCIALIST DEMOCRAT PARTY ) invaders, for five years.Hitler and Stalin conspired to invade and imprison all of Europe, in 1939.

beware of the stalinists and maoists " QUISLINGS" in the present U.S. government.....

It was just the opposite....she OPPOSED him overbuilding Muni Parking Lot #1.

Now it's Gary Ackereman and his buddies at the Queens Tribune who are supporting TDC's massive Flushing Commons Project.

WTF were you smoking when Harrison was our council member?

Apparently, you're still trying to blow some of your smoke up our asses!

They've suffered enough to earn at least that.

And how much money did Johnny boy give to Taiwan Center over the years through his discretionary funds?

No wonder they held a prayer vigil for Liu during his current time of trouble.

Liu had better pray he doesn't get Bubba for a cellmate.

The again....has anyone see that old (Daily News) boyhood photo of Liu in his tight white jeans standing in front of the Parthenon in Greece?

Julia's husband was a lifelong communist Master of Deceit! And Julia never was Jewish, but was born in Roumania.