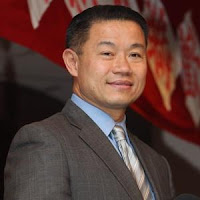 Some 13 employees at Chang’s McSam Hotel Group and his Comfort Inn in Flushing dropped $800 each into Liu’s coffers. Over at W&L Construction, which has worked on properties Chang developed, 19 more employees gave Liu $800 each, for a total haul of more than $15,000.

If Liu returns those donations, he’s essentially admitting that he knows Sam Chang & Co. were the real source of that funny money.

But if he keeps the Chang checks, he’s holding on to donations that seem mighty likely to be illegal.

Either way, it looks like Liu is in a fix.

Fact is, this man has no business playing any role in city government — least of all as comptroller, where he’s trusted to oversee the city’s $65 billion budget and billions more in pension investments.

Which is why he needs to drop the act and resign immediately.

Things are only going to get uglier for John Liu from here on. He should spare the city the taint of his presence and get himself gone. Now.

Sounds an awful lot like commentary posted here over the weekend...
Posted by Queens Crapper at 12:31 AM

I hope he tries out for American Idol. I want to hear him sing!!!

He was never comptroller material. I still say there was some fishy business going on during the ballot counting at certain polling stations. Can we please get someone honest and willing to work for the betterment of our city and not for their own self interests?..
Can we recruit someone from Iowa or Montana perhaps?

How smug are you now?

liu is counting on the O.W.S.socialist tools, nyc public union slush fund leaders,ethnic asian groups and progressives from the city council to rally their left wing comrades to keep him in power.

unless someone whistleblows real criminal activity in liu's political campaigns ,he will survive. just like W.J. and H.R. clinton, Barry Obama,John Kerrey and the many democrats who Norman Hsu bundled for.

if you want to read how a professional political group neutralizes a political opponent in an election , Google :Ann Coulter.com "David Axelrod's Pattern of Sexual Behavior "

the story of B.Obama's rise to power in Chicago and the U.S.

If anyone knows when the perp walk will be please post it in advance. I might just fly in for it.

wonder if he takes the vallone clan with him

"unless someone whistleblows real criminal activity in liu's political campaigns ,he will survive. just like W.J. and H.R. clinton, Barry Obama,John Kerrey and the many democrats"

Ah there goes ol' snake in the grass again.

-Even has the neocon approved "Barry Obama" to which I'll respond; you are a loyal viewer of Fox "News".

Forget it gramps, Your gop guys have been stabbing the working class in the back for years. Fools like you think that because they live in some stick house in N.E. Queens that they belong in that group.

Liu will be investigated and verdict rendered if any wrongdoing is found.

I think his indicted bundler,
Mr. Pan, is already hitting his high "C" to avoid serving a long jail term.

Soon some other members of Johnny's chorus will appear on the federal stage.

And what an act that'll be folks!

I'm waiting for the money trail to lead right to Ackerman's door.

Liu's petitions should have been challanged when he ran for city council.

His campaign was rampant with fraud from the very beginning.

Pat down Congressman Ackerman and, no doubt, something fishy will be found in his pockets.

What has "Virginia" Joe Crowley got to say on the subject?

Either way it don't matter you been duped once more by your gop propagandists.

You must be a riot at family gathering...Behind your back of course.

You could avoid a lot of embarrassment by turnig off the AM radio and doing some research.

Here I'll get you started:

"Ridicule is man's most potent weapon (it is almost impossible to counteract ridicule,) also it infuriates the opposition, which then reacts to our advantage."

Yeah right! I sense a schmuck trolling on this blog.

Just caught this photo of Moe, Larry, and Curly:

-And so-on. Understand gramps you got caught lying...again..

You are so used to lying to buck up your nutty right-wing conspiracy theories that you think everyone will fall for it, as you have.

Stick to truth and fact.

Given the current field of Republican candidates, Gramps, it could be a repeat of 2008. Ronald Reagan isn't running and none of the people who arein the race have exactly impressed anyone.

and he is campaigning by blaming congress (2008-2010 with a dem. majority senate & house ) for not doing his job that we pay him for.

remember R. Reagan was originally a dem.,until he realized that the marxists were about to control his party in California.he was president of the Screen Actors Guild,which did become leftist in Hollywood.
the Hollywood left dissed H.R.C for the leftist in office presently.

There's only one problem with your thinking, Gramps. Ronald Reagan isn't running for President next year. Rick Perry, Herman Cain, Mitt Romney and Michelle Bachman are. Who are your guys trying to win with in 2016?

after the obama/leftwing destruction perpetrated on the citizens of the U.S.from 2008 to the present,the American -loving 2012 g.o.p./conservative team will serve in 2016.

America took a chance last time and was stuck with a loser. Hopefully ,NEVER AGAIN.

Not really, because they're going to remember what the RepubCon/Fox "News" types gave us in the eight previous years. He's going to be reelected, especially given the current crop of RepubCon candidates. At what point are you going to call Mitt Romney at RINO, Gramps?