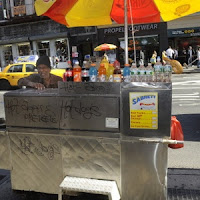 A Queens lawmaker has drafted a bill that would mandate posted letter health grades for street-meat sellers.

State Sen. José Peralta (D-Queens) is introducing a measure this week that would require local health departments to come up with a letter-based scale similar to the city’s current restaurant-grading system, following a Post report on the worst of the wurst violators.

“Consumers should know if what they are eating meets certain safety standards,” he said. “If they have an ‘A,’ you’ll eat there. If they have a ‘C,’ maybe not.”

At present, patrons have no way of knowing whether the dirty-water dog they’re about to digest actually deserves the sobriquet. The city Health Department does not publish online inspection results, let alone grades.

Right, but we learned recently that the ones who get bad grades can get them changed to good grades after a hearing. So grading doesn't really tell us anything about the sanitation standards of the vendor.
Posted by Queens Crapper at 12:18 AM

warning : do not eat the cart food!!!

i observed a vendor washing his cooking apparatus with rags that he dipped in the gutter water.

Letter Grades are the great equalizer. You don't have to be a large chain to assure quality. Bravo Bloomberg!