Someone's in for a big surprise... 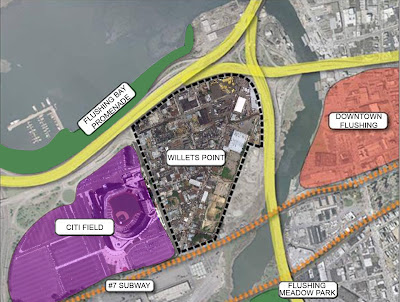 The fate of the [living wage] bill is largely in the hands of Ms. Quinn, who must decide whether to let it come to a vote. Thirty of her fellow council members have signed on to support the measure, which Mayor Michael Bloomberg has promised to veto. Thirty-four votes would be needed to override his veto.

Opponents of the measure are promising a fight. They've advertised in local newspapers and a dozen plan to testify at the council hearing. “It's no surprise that the same union which helped kill 2,000 good jobs at the Kingsbridge Armory is back on the bandwagon now,” said a spokesman for a coalition of business groups that oppose the bill.

The opponents say it would make it impossible to develop retail projects in the outer boroughs. An insider at one firm that bid for the first phase of the Willets Point redevelopment said the project “would be unleaseable,” and therefore unbuildable, if the living-wage ordinance passes.

“Any project that has a large retail component will not be able to get over the burden with national retailers,” the insider said.

Living wage was mandated by the City Council as part of the Willets Point project. So which nimrod firm bid on a project they don't think is feasible? Mike Meyers, is that you?
Posted by Queens Crapper at 12:50 AM

Quinn is trying to flex her liberal base & council-members are all liberal democrats courting union votes.

Allow this to pass but first prove the idea by forcing all businesses that surround Riverside Church to enact the $10 hr wage. Once that's implemented for 6 months (If there are any businesses still in business!) then pass it for the outerboughs!

How much of a "living" wage has Claire Shulman accumulated so far?

What is unfeasible is trying to live in NY on less than $11.50 an hour. How many hours would you have to work to be able to afford a legal apartment and medical insurance?

I guess you should pay attention in school then and not slack off so you can go onto college and earn a decent wage. Who mandated that everyone in the city should be able to afford their own apartment? That's what families and roommates are for.

It's pretty funny that you think going to college equals earning a decent wage.

"There's a commitment to require any developer to provide prevailing wages for construction, service workers and security guards, as well as a "living wage" of $10 an hour or more to retail workers."

We can always hope the "West Coast Hotel Co. v. Parrish" will be reversed by a future Supreme Court.

If you want a minimum hourly wage of $11.50, get it voted on in Albany. Having the City Council vote on this is ridiculous.

So we can have more greedy landlords illegally subdividing buildings into sleep cubicles for hordes of illegals who sleep in shifts and use the hospital ERs as their primary medical care and drive health care costs through the roof for everyone else?Nah- couldn't be!

college tuitions would be much more affordable , if the professors would take a 50 % cut in their salaries.

especially all the ex -obama appointees pretending to teach at the IVY LEAGUE leftie campuses.

"And how did you like my last night's digested sauerkraut"?

Why stop at $11.50, make that minimum wage a round $20 and watch the poor enter the middle class.

Why didn't we think of this years ago?