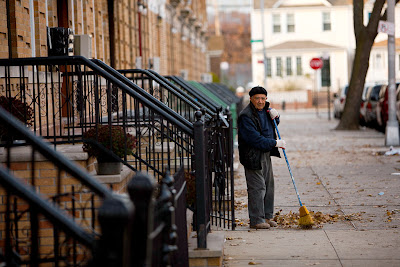 Inside its cemetery sandwich, Glendale is long and narrow, extending about two miles from west to east and sometimes less than half a mile from north to south.

Roughly 30,000 people live here, according to census figures. German-Americans have had a strong presence for more than a century, and in recent decades East European immigrants have gravitated here. There is also a strong Hispanic presence, although blacks and Asians are scarce.

There is an appealing variety of housing, most dating to the first half of the 20th century. Off the main roads like Myrtle, the streets are serene, and many are canopied by large trees.

One-family brick Tudors, both attached and detached, are probably the most exclusive of the homes, but attractive colonials with tiled roofs provide competition. There is also a big supply of semidetached and two-family wood-framed colonials, many with driveways. A few streets are lined with handsome six-family brick buildings.

Wow, you'd think from this description that Glendale is crap-free. Good thing we know better. I wonder why they never mention the "new luxury housing stock" like the Durow's site?
Posted by Queens Crapper at 12:15 AM

Most all your Matthews Flats in Glendale are strictly located on blocks located between Myrtle and Cooper.

Roughly 30,000 people live here, according to census figures. German-Americans have had a strong presence for more than a century, and in recent decades East European immigrants have gravitated here. There is also a strong Hispanic presence, although blacks and Asians are scarce.
----------------------------------
Articles like this are usually a kiss of death to such demographics. In the near future, the Daily News will print a similar, VIBRANT! DIVERSE! article about Glendale, and within the next few years, the black and asian presence will increase tenfold.

VIBRANT and DIVERSE !
Yeah direct the NY Times pool of corn husker "burp n fart" journalists.
How many NYU intern points (vs pay) did the writer of this piece of sh*t get ?

Another institution turned to sh*t. Is the NY Times now having a pissing contest with the Daily News ?
-Dumb following dumber just like the mayor and his friends wont it it

I live in Glendale.

They mention the one restaurant everyone has heard of (sorry, not you Edison Place and screw you Tazzina!) didn't describe the housing stock accurately (Matthews flats as noted above), didn't mention the different sub-nabes (up yours Liberty Park!), and couldn't even get the borders right (uh, Fresh Pond Road ends at Myrtle, NYT).

This article HAD to be phoned - I mean, iphoned - in.

I guess that's the status of print media. Research and fact-checking just ain't in the budget!

The neighborhood is already on the decline. 3 or 4 ConEd meters on a 2-fam house.

Most of those 1&2-fams are falling into disrepair as the owners see no need in maintaining them (paved over gardens, broken sidewalks, etc). People renting out their garages for parking spots

...and "Eastern European" is just a nice way of saying Albanian and Slavic gypsies.


And how is it the only people in this area driving Audis and BMWs are 20 year old males blasting polish disco music? What kind of 'products' are they making money with????

"Another institution turned to sh*t. Is the NY Times now having a pissing contest with the Daily News ?"

Oh, but here's the BEST part of the article,

"For about 30 years, Joe Topornycky has lived on the 19th floor of the Forest View Crescent co-op. Some of the transformation has happened just across from his building, as a handful of shops, including a Starbucks, have moved in."

THAT Starbucks CLOSED TWO YEARS AGO!

Joseph Plambeck! (author of the article) Love your commitment to detail and accuracy! FOX News is calling!

Blacks and asians do not like living in close proximity to cemeteries......

Well, attachment to superstitions is a sign of poor education and ignorance.

I bought my house that backs up against one of the cemeteries. Low risk of any development, lots of green space to view, and best of all, the neighbors are *really* quiet!!!