Sam's got Johnny's back 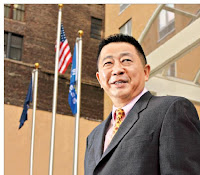 Many of the low-paid maids, truck drivers and janitors who donated to embattled Comptroller John Liu’s campaign coffers are connected to businessman Sam Chang, the budget hotel king of New York, records show.

Liu, a mayoral hopeful, received at least $29,600 from donors who owe some or all of their income to Chang, according to 2013 campaign data from the city Campaign Finance Board.

The donations from Chang, his employees and business associates, come as investigators from the US Attorney’s Office are swarming around Liu’s campaign records looking for fund-raising violations and possible illegal overseas contributions.

Chang, who has run as many as 37 midrange and budget hotels in the city, had no comment, according to a secretary at his Great Neck office. He personally gave Liu $800 on July 1.

Six other employees of Chang’s company, McSam Hotel Group, also donated $800 on July 9, records show, and another had donated in June.

Also, on July 9, six employees of Chang’s Comfort Inn Flushing each gave $800.
Posted by Queens Crapper at 12:40 AM

There's another "Sam" that needs to be scoped.

His "Bowne Tree" infill condo project has been unoccupied for about 12 years now.

It cannot get a certificate of occupancy because it violates FDNY's fire code!

Why hasn't it been torn down yet?

Let's not forget that Johhny was taking donations from the employees of the Great Eastern Bank for his first campaign as his daddy was under indictment for ripping that very bank off to the tune of a million dollars.

Daddy was the President of the Bank.
the apple doesn't fall far from the tree.

georgetheatheist said...
This comment has been removed by the author.
Wednesday, November 23, 2011

Oh yeah right! Sam Chang's a liar too! I hope the Post isn't falling for this.

BEWARE ALL YOU "SLICK" CROOKS.

The pride
always comes before the fall.

I see plenty of ripe political figs out there, just waiting for the federal birds to peck at!

Eventually...all will come out in the wash...including the Chinese money laundries!

I think that Evan just shit his shoes because "Parkside" might be connected to all this Liu business.

"I'd love to put Liu on a slow boat to China...all to himself bound in in chains".

Maybe the FBI will tie Alice Huang and Tommy Huang to their cousin John Liu. Perhaps, they will even follow the money trails. How convenient having a cousin who is the NYC Controller, whose father was the President of the Great Eastern Bank.

Liu should collect all the monies from the Huang's outstanding violations and unpaid fees. Imagine if he went after all the developers. What about those future contributions though? He could fill the City's coffers dramatically.

Perhaps, they could figure out why the Huangs are untouchable and above the law.

Didn't the Huang's do mortgages with the Great Eastern Bank.

Was Alice Huang's father involved with the Great Eastern Bank?

Did he get contributions from some of the company's that the Huangs used as contractors and subcontractors?

Angelo R. Costa, R.A. was the architect for the Suzuki project. The project violates FDNY's fire code. The project has been there for 12 years. Have the politicians passed a law yet to remedy this situation? That is knock the buildings down. Of course not.

What a coincidence, Angelo R. Costa is the architect on the Huang project in Bayside that also violates FDNY's fire code. The project began in the end of 2003. Allegedly, blatantly, violates building code and zoning regulations.

The DOB is still disfunctional and corrupt. What is the point of creating new enforcement positions, revising the code, claiming to have allegedly improved transparency and increased oversight. Total Bull Crap. Nothing has changed.

Lancaster said before she retired that the DOB was going to be zeroing in on the Huangs, making them come into compliance, Tommy was retiring and number one and number two sons are going to be compliant.

Fatal collapse January, 2011, Tommy allegedly seen running from the site. Should never have happened. OSHA published the results of their investigation. Nothing from the DOB or DOI, yet. Curiously, no law suit filed against the City. No law suits announced that we know of by the deceased's heirs or the other injured persons.

Construction is going to begin again on the site in Bayside.

They are going to: According to the website: BC APPROVAL TO OPEN CEILINGS OF CELLAR,1ST,&2ND STORIES 4'OC TO INSTALL TIE-DOWN STRAPS TO SECURE JOISTS TO FOUNDATION 48"

They would have gotten their C of Os a long time ago. Thank God they didn't. The new homeowners would not have "known" that allegedly the houses were "unsafe".

Costa is still self-certifying filings and objections. He should have lost his DOB license and he needs to lose his NYS license.

I don't get it. Can someone please explain to me why do the feds care about who is donating money to John Liu and why is there a limit in the amount of donations? I mean it's a donation right? So the amount is up to the donator.. there shouldn't be a limit. What is the point of all these who is donating and how much is donating money to the politicians. Forgive my ignorance.
This is a serious question, not an attack or anything so please reply with an educated response. TY.

Because the public matches the funds candidates raise 6 to 1. And because you can't as a donor spend in someone else's name.

How come Chang's Woodside Terrace Condo on Queens Blvd. & 63rd Street still remains vacant? It was supposed to be occupied in October.

It's very strange for a maid or a janitor to be able to afford to make a donation to a politician or anyone else for $800.00 that's like 2 to 3 weeks pay right their ;-( Somethings very fishy Sam ;-)