Joe Bruno to be retried 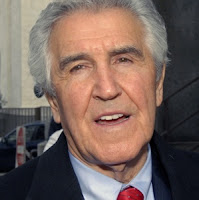 The federal government intends to re-try former State Senate Majority Leader Joseph Bruno on government corruption charges after the U.S. Court of Appeals for the Second Circuit ruled today that it can.

But the court found the federal government presented sufficient evidence in its initial prosecution to retry the upstate Republican on the two charges on which he had originally been convicted and a third that resulted in a hung jury.

U.S. Attorney Richard Hartunian and Special-Agent-in-Charge Clifford C. Holly of the Albany Division of the Federal Bureau of Investigation announced their offices "will work expeditiously to present a superseding indictment."

I personally saw two old people in an adjacent building crying and scared of losing their apartments in 1997 when this bastard vowed to end rent stabilization.

Typical republican. Doesn't give damn for anyone but the wealthy and propertied.

I hope the son-of-a-bitch dies miserably in prison.

Joe Bruno like the rest have major issues but he is from Saratoga County where he single-handedly brought back this country from the dead. It is currently the only county outside NYC that is growing and healthy in NYS.

"Typical republican. Doesn't give damn for anyone but the wealthy and propertied."

you're right! just like Seminerio and McGlaughin and Liu and even Bill Clinton with all his poor hollywood friends!

Good for the arrogant prick!

is he reverting to his community organizing training in flushing.is he the chinese version of al sharpton (of tawana brawley infame )

btw ,did the two old people actually get evicted ? tell the truth .
seniors had many exemptions when it came to rent stabilization. i know of a senior who paid$100.to $200. per month rent for 50 years, for a 3 1/2 room apartment in a great Flushing area. no gov.rent policy threatened her during that time.

renters as well as landlords can be greedy and uncivil.

a reminder : democrats made millions at Fannie Mae &Freddie Mac. examples are RAINEY-$90 million,Jamie Gorelick(clintons D.O.J,) $26 million,Johnson $23 Million. and then there is Barney Frank and Chris Dodd, etc,etc. i can continue..... A.Cuomo was the H.U.D. Secretary, at the time ,approving all the free lunch housing loan policies for non qualified potential minority borrowers .

"renters as well as landlords can be greedy and uncivil'

Bruno and henchmen put working New Yorkers through hell over the fear of losing their homes just so that this shit could pay back the Rent Stabilization Assoc (typical of republican fronts -they have a deceptive name) for the Potaki and upstate republican elections of 1994.

Tens-of-thousands of dollars flowed into republican campaigns that year, as a result, millions of New Yorkers now suffer under soaring rents due to vacancy decontrol.

Fifteen years ago two young people could still afford a 2BR apt on their own, now you see 4-6 people crammed into that same space....for the greed of a useless leech.

A two bedroom apartment is still affordable to two people if they don't just HAVE TO live in Manhattan.

Bruno brought semiconductor fabs back to NYS from Texas and California!