There he goes again 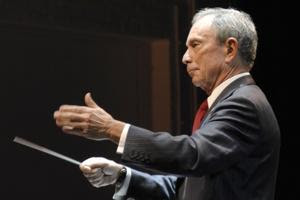 Fanciers and critics of Michael Bloomberg alike, take note; there are signs he’s noodling once again about making an independent run for president.

At a press conference in Staten Island, he declared: “The failure of the supercommittee to come to an agreement is just a damning indictment of Washington’s inability to govern this country.”

He went after Obama especially: “It’s the chief executive’s job to bring people together and to provide leadership in difficult situations. I don’t see that happening. . . This partisan paralysis and political cowardice is defining Washington, and we just cannot afford to have that continue.”

That’s the kind of talk we heard from Ross Perot before he decided to take the plunge and run as an independent in early 1992.

None of this comes anywhere near demonstrating that Bloomberg will run. We do know he took the idea seriously last year and spent a considerable amount of money researching the possibilities.

I suppose he'd live on 79th Street because it's better than the White House?
Posted by Queens Crapper at 12:08 AM

Your Arrogance:
You have overstayed your welcome.

He joins John Vliet Lindsay and George Pataki in having such fantasies.

Between Perry and Barry, Mike's in.