Pension bomb about to blow 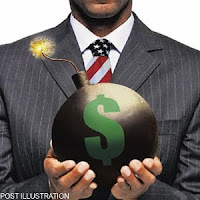 The city is sinking into an $100 billion hole of soaring employee pension and health care costs.

According to the city’s latest annual financial report, New York City’s five pension funds, including those for teachers, police officers and firefighters, are short nearly $40 billion on their future obligations to current workers and retirees. And that’s based on highly optimistic — some say “delusional” — calculations that the city will somehow earn at least 8% a year on its investments going forward.

In a double whammy, the report also lists $65.5 billion in unfunded but locked in future health care costs for current city workers and retirees, bringing the shortfall to a staggering $105.4 billion.

In New York, like elsewhere nationwide, the dilemma is similar: Government employee benefits have improved while investment earnings have collapsed. Taxpayers are forced to dig deeper to plug the gap.
Posted by Queens Crapper at 12:30 AM

Get ready for a strike by city workers, and 100,000 unemployed new yorkers ready willing and able to take over their jobs at a lower pay

Its over people, the money train has run out....

Guv workers must accept zero pay increases for years and pay more for health care and no more early retirements...

We are scabs we need the jobs...don't piss me off and act stupid and threaten a strike.

Many articles have debunked Crain's, which this article is based on, and have asked Crain's to remind the public that when they city's investments were getting 12 - 24% in good times it saved away the excess over 8% back into the city's budget and put into rollover accounts. But when it doesn't get 8% (this year the city only made 5.4%, the city foot the difference from the budget which includes these rollover accounts)

Only problem was the Bloomberg Admin. used the good-times funds to pay for his enormous expanding payroll and projects forcing the City to rant and rage about paying the difference.

But the Health care coverage has become an issue but City law requires that Meidcare (most retirees from non-uniformed city are over 60 years old) cover the health care costs first when the retirees are eligible.

So this problem is being overblow with 'convenient' stats.

Sorry, if you think the sky isn't falling its because your head is in the sand. For years the union have raped the people of NY and the day of reconing is coming. Look at greece, Irelnad, Portugal and Japan. Years of overspending have finally caught up. Think it can't happen here? This week it was reported that the rating agencies were considering downgrading US debt. Fact is most of the jobs would pay a fraction of the benefits that the goverment so freely doles out. Why should goverment employees get pensions when those in private industry do no? Unions have destroyed the auto industry and they will not be satified until they destroy america.

End unions and the problem goes away.

Why are we giving GED grads early retirement, seniority, months worth of vacation days, zero deductible health/dental/etc plans, and pay checks for life beyond the job???


Manage the money your earn, save for your own retirement. Private sector employees seem to do just fine.

Unions have always been the safe haven of the weak, lazy, and stupid. "You are only as strong as your weakest link"

You people better work harder to fund my pension!

Maybe the city should raise your taxes to fund my pension, while I gallivant along the French Riviera!

Union pensions? How about everybody's pensions?

This was "forecast" to happen in 2016. Social Security is the Uberponzi scheme that makes Madoff look like a piker.

"...DEMOGRAPHIC FORCES ARE EXPECTED TO OVERTAKE THE FUND, AS MORE AND MORE BABY BOOMERS LEAVE THE WORK FORCE, STOP PAYING INTO THE PROGRAM AND START COLLECTING THEIR BENEFITS. AT THAT POINT, OUTLAYS WILL EXCEED REVENUE EVERY YEAR, NO MATTER HOW WELL THE ECONOMY PERFORMS."

Get your dough now before the entire system goes into the toilet.

I agree that it eventually will happen, but in 40 years.

These warnings of pending social security doom has been out there since the early 1980's. I remember Gore wanted to put a trillion of the surplus in a social security 'lockbox' and Republicans laughed and Bush blew it all on crappy refunds and uneffective breaks.

I agree with George that it is somewhat of a Ponzi scheme but if we get a guy who can go a 'Chris Christie' in Washington then SS will be OK.

PS- I am a die-hard rabid liberal democrat but I absolutely applaud what Christy did in Jersey. He pulled a 'Dave Ramsey'.

"I agree that it eventually will happen, but in 40 years."

Don't be a fool Ther was never a surplus or a lock box. Let me explain what happened. The goverment collects your money from each paycheck. It goes to the SS administration. After some time the gready lawmakers looked over there and saw that there was a pile of cash sitting there. Most politicians are full of new ideas of how to waste taxpayer money and buy votes and reward friends and cronies. Most politican don't like raising taxes because they know it is unpopular. So rather than raise taxes they dipped into your retirement fund to pay for wars, bailouts, bridges to nowhere, farm subsidies and studying cow farts. This was great for a time, because they got to spend like drunken sailors, but never had to commit political suicide by raising taxes. In place of the money they spent they left IOUs. Fast forward to the present day.

After decades of raiding social security the gig is up. Sure on paper is solvent and can last for 40 more years. When you look it has a ton of assets - mainly IOU from the US goverment. so let's play this out. Now that the payroll reciepts are exceeded by the payouts, we SS now has to go to the US goverment and say, Its time to pay back your IOU. The US goverment and the politicans say WTF, I never thought this day would come and I have no money to pay them back. At this point you have four options:

1) borrow more money so I can pay back the money I borrowed form Social Security - Who the fuck is going to lend us this money? China? They are already saying that we are concerned about our debt levels. This week there was talk about downgrading the USA credit rating. Even if we could borrow it the cost of paying the interest would crush the annual budget as larger portions of it must be set aside to pay down interest. We would have to borrow at high rates of interest since we are already maxed out.

2) Print more money - sound easy, but the more US dollars there are in circulation the less each one is worth. The falling value of the dollar would trigger massive inflation, and a run on the dollar. The US econmy would be crippled.

3) raise taxes - yeah you could do this, but how many time can you go to the well. The rich are cynically told that they need to pay their fair share. We guess what they have and continue to do so. The problem is that the goverment pissed it all away. More importantnly there is a limit to which you can tax a person. At some point it become less expensive and more financially sound to sit at home and do nothing. Between state, local federal, property, sales, payroll taxes, etc. i am already paying close to 50-60% of my income in taxes. Do you go to 70%? 80%. At what point do people realize that hard work not longer pays?

So you see anon, the house of cards have already begun to fall. Especially when you add in the massive Obama Care drain on the treasury. You are sadly mistaken if you think SS will be here 40 years from now. This was a massive ponzi scheme where the US taxpayers are left holding the bag.

This is why the tea partyers are gaining so much ground. People realize that big government spending is out of control and none of the politician have the balls to say what I've just said above. I'm in my 40's and do not factor SS into my retirement plans. I know full well I can't depend on it.

It looks like the tea party is showing its true colors with bad information from people like Bachman and they are going to self implode with their behaviour.
Not a very stable bunch which is no longer anything to do with Ron Paul who could hold both sides accountable with solid information.

I'm ready for change we can believe in. If the Tea party can get ti done, then count me in.