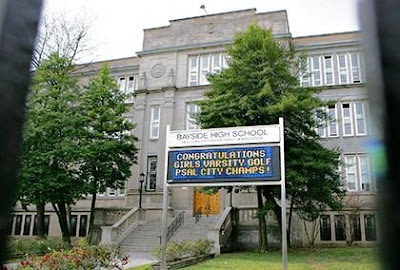 The controversial Bayside High School LED electronic display sign remains turned off as officials continue to work with the city on having it comply with zoning.

The sign, which cost around $33,000 with funds raised by students more than three years ago, was erected in the fall. A few neighbors living near the school on Corporal Kennedy Street complained that the light generated from the sign was beaming into their homes and was particularly offensive late at night.

Community Board 11 got involved in the issue and one of its members, Frank Skala, who is also president of the East Bayside Homeowners Association, met with the principal, Michael Athy. Athy later turned the sign off at night.

But the Queens Chronicle discovered that the sign is illegal in a residential neighborhood and the Department of Buildings referred the case to its sign enforcement unit.

The display was turned off completely on Dec. 18. Marge Feinberg, spokeswoman for the Department of Education, said on Monday that the principal has not heard the sign is illegal, but that it would remain off.

Carly Sullivan, spokeswoman for the Department of Buildings, said Wednesday her agency’s audit of an application by Mahatab Siddique, an engineer, to remove the illumination is still open. “They will have to change the existing sign to comply,” Sullivan said.

She added that it’s up to the engineer to either remove it or fix the existing one. According to her, it was the engineer who installed the sign and also self-certified it, indicating that it met city requirements. Calls to Siddique were not returned.

Photo from Times Ledger
Posted by Queens Crapper at 1:13 AM

These LED boards all work the same.
To dim them just need to drop the common anode voltage by adjusting the power supply inside.
People who run schools are crooks and idiots IMO.
Some contractor and "friends" in that school are likely making some big money on all of this.

Mahatab Siddique, the engineer who reportedly "self-certified" that the sign meets lawful requirements, should have his license to practice revoked. Who is working on this?

I have to laugh at this - how stupid must you be to NOT realize that this sign in shining directly into the windows of the neighbors. Administrators of the school obviously did this - I can't blame the engineer - they hired him!

A college degree is a terrible thing to waste.

Such BS. The sign is in the front of the school, and directly across the street is a NYC park. The closest house has to be at lease 500' away. It's just the likes of the geriatric community that have nothing else better to do than to complain over nothing! There's NO WAY that those lights are shining into peoples homes. They're just upset that the sign looks too commercial probably. And Frank Skala was one of the MOST DISLIKED teachers at IS 25 by the teachers and Faculty. Im sure he has'nt changed his way much!

Signs like that are pretty bright, but It's no that visible. It's just whiny crap. Instead of paying to take the sign down, why not just shut it off at 8PM or so? Turn it back on in the morning. Maybe keep it off when school isn't in session? Save some money and some energy.
Or would that make too much sense?

So Holy Cross can have an LED sign on a busy street which seems like a hazard to traffic because it is a distraction, but a public high school can't because some neighbors don't want it? Hmmm.... It seems to me that the only thing across the street is a park so I don't see who the sign is bothering exactly. Sounds to me like the community is against something nice for a public highschool. Baysiders need to get off their high horses.

Why do kids need this kind of sign at all? Skip the nonsense and invest in a few amenities they can actually use such as supplies for teachers or new gym equipment.

School spirit my ass. Every time I have to pass Bayside HS I see the blacks and the asians fighting (I root for the asians).

I'd love to know who on Corporal Kennedy Street complained, since as others have said, there's a park directly across from where the sign is.

This sign was planned prior and installed just as the new principal came on board. The sign was installed on the Friday of labor day weekend, and on the first business day after a letter of complaint was sent from Ed Braunstein who lives on 210th Street and is a CB 11 member, via Councilman Avella's office claiming that the bright lights were beaming into the home all the way across the park on the other side of the street and causing an annoyance. The school responded to Councilman Avella and afterwards, the sign was dimmed, and flashing turned off. Then the sign was shut off in the evening to come to a compromise yet Frank Skala led the rants and raves for Ed Braunstein and under the name of East Bayside Homeowners Association sought to have the sign taken down. He met with the school leadership team of faculty, parents and student to present his case. Skala, as head of the Bayside High School Alumni Association shows how two faced he is to have the $33,000 of student raised money trashed at his desire. I live down 210th street and at night and with the bright street lights, that sign hundreds of feet away is not a problem in any way, unless the person wanted to say it was a problem. What a piece of work. Shame on you Skala and Braunstein!!!

OK I go to Bayside. The sign is facing the front of the building. There is a Park across the street. LOTS OF TREES. You'd have to have supper sonic vision to see that sign. The houses around it couldn't have even seen a glint from that sign. The money could have gone to something much better though.