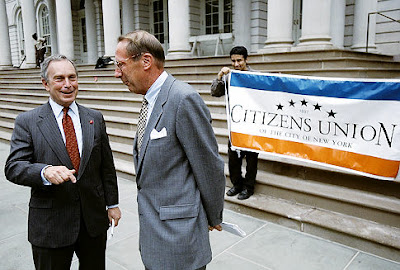 One of the city's oldest watchdogs is trying to find the right balance between its bark and its bite.

Citizens Union, the good-government group that has pushed for reform and transparency since 1897, is grappling with how close it should be to the politicians and government officials it monitors.

One of its board members, Joel Berger, resigned this month with a scathing e-mail, accusing Citizens Union of straying from its roots by cozying up to Mayor Bloomberg, City Council Speaker Christine Quinn and Police Commissioner Raymond Kelly.

"It saddens me that the organization has become so timid, conflicted and corrupt that I can no longer serve it in good conscience," Berger wrote.

Citizens Union executive director, Dick Dadey, and its board chairman, Peter Sherwin, both reject those charges.

They said they have consciously tried to work with New York's movers and shakers to create real reform, instead of just hollering from the sidelines.

At a hearing this month on the commission, Assemblyman Rory Lancman (D-Queens) lashed out at a union staffer who testified against a state plan to curb the mayor's Charter power.

"I'm just trying to figure out what are the outer limits of Citizens Union's willingness to be a shill for the mayor," Lancman said. "At what point is Citizens Union going to actually advocate for the citizens and not merely for Mayor Michael Bloomberg?"

Citizens Union called for a referendum on extending term limits in 2008 and strongly opposed how Bloomberg rammed it through the Council. Then it endorsed him for re-election, saying he was good on most other issues.

Not only that, but according to Atlantic Yards Report:

The Citizens Union (CU), responding in December 2006 to a drastic decline in estimated tax revenues--first revealed by AYR, then picked up by the New York Times--called for a “limited delay” in the process and noted that it “does not align itself with those who oppose the project and wish to use the process of delay to kill the project, because we believe that economic development is needed so that the city can continue to be a dynamic place of business and meet the needs of a growing population.”

No call for an investigation as to how Ratner got away with bidding less for the railyards than competitors and winning the bid? No outrage over eminent domain abuse? That's some 'good government' group.

Told y'all about this shady group months ago. Glad that the mainstream press is finally catching on. Sadly, only after the election...
Posted by Queens Crapper at 1:44 AM

Good for him, I stopped supporting them after they endorse both Quinn and Bloomberg for their 3rd reelection. Citizen Union is no watchdog but sold out a LONG time ago. fuck them

Dick Dadey is one of the most corrupt hacks that has ever lioved.

You should see Dadey at press conferences licking Bloombergs balls. The guy is a pig and an animal.

From the preservation movement, to old line institutions like the Municipal Art Society, to feminist support for Bloomberg, to groups like ACRORN supporting development and displacement, to the Democratic Party itself, institutions seem to have lost their way - they no longer serve the interests of the common man.

Time for a change, people. It will happen if we are ready or not.

Only this time, it will not happen with a gun, but a blog.

The Citizens Union is bought & paid for by the Mayor etc etc etc. No doubt about it ! I wouldn't give a dime to this phony organization.

They used to call these groups "goo-goos"

I'm a fan of staying on topic.

Well great but other people had brought up the Tea Party but there was no comments showing the threats and violence dems and others had faced which was in major newspapers and elsewhere.