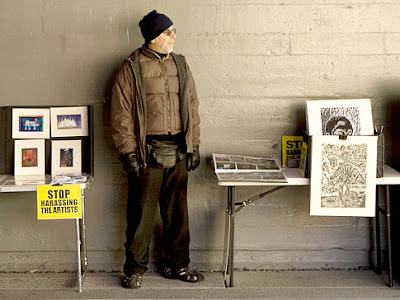 The Parks Department wants to limit the number of painters, photographers and other artists who display their wares in popular Manhattan parks - and the artists aren't happy.

"People come here to brighten their mood, during their lunch hour, after work," said painter Jessie Bowers, 35, of Brooklyn, who goes by the name Cypha. "If you spread us out, this part of the park would lose its essence."

He was one of at least 28 artists selling their work in Union Square Park, where the city wants to limit the number to 18 first-come, first-served spots.

There would be just nine spots for artists in Battery Park, 24 flanking the Metropolitan Museum of Art, four at Columbus Circle and five on the High Line.

Artists face no limits now, thanks to a series of court rulings giving them First Amendment protection. Parks Commissioner Adrian Benepe says that has led to chaos and overcrowding.

"It's an attempt to get a little bit of organization back," Benepe said.

No, it's more likely an attempt to make money.
Posted by Queens Crapper at 12:10 AM

Maybe the problem lies with those who sell so-called art (Chinese pre-fab) out of the back of a truck on Parks property. These are not Artists but commercial art vendors (bootleggers) who set up shop to make quick buck at pocket parks in Elmhurst.

Calling 311 and 911 does nothing and these folks proliferate during nice weather and sell to car commuters passing by who see the giant works (2 for $30) and clog up the intersections to peruse the "bargains" of velvet art!

The line between commercial vendor and artist is undetectible and unenforceable, right? I vote to remove them all. Get a permit if you want to sell anything on, and block my parks and streets.

Benepe is right this time. People and all these yahoo transplants are really abusing the privilege

The parks are starting to look like commercial flea markets and junkyards.
These Idiots even fight over turf.
Some of this "artist" crap is so dense its like navigating a obstacle course to cross the street on park corners.

Question is who will enforce it, the cops ?

Adrian Benepe should fuck off! We are at an age where politicians and city officials want to ban and tax everything in the city and state.

Let's eliminate some of the city officials and politicians we have in New York. They are the real problem.

I have witnessed first hand what goes on down in these parks,I don't know what your talking about off the back of trucks but I do know there is alot of generic,mass produced, crap out there, but there is also a huge amount of genuine artists surviving by selling their work directly to the people as opposed to trying to get into gallerys etc.So do we wipe out all artists just because of this? No, if the parks department just enforced the currently standing rules, there would not be a problem, but they are purposely NOT enforcing the rules so the artists and junk sellers get out of hand so they can now turn around and say "look, you guys are causing a problem,now you have to get out". It's a clever tactic to gain complete control of the parks, so they can continue to sell off the space. You think you have free public space, well let me tell you, you won't in the future. Parks are changing, you can't even sit on the grass of half of them anymore.Adrian Benepe is nothing more than a real estate agent for the city,scoping more ways to privatize your public spaces, all in the name of making it better for New Yorkers. It's bullshit, and you guys who want all artist out of parks, go visit other city's in the USA, where you get offered nothing but generic souvenirs,mass produced photos of typical scenes, this is all you are going to see in the future. Concession stands owned by the city, selling what "art"they choose. Wake up and smell the roses, land of the free!!! You a being bought out every way you turn.
You can thank BLOOMBERG for killing a lively culture of real street art, that now, mostly exists in NY.