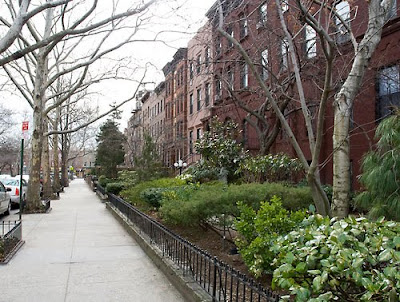 When Amsterdam Avenue's West-Park Presbyterian Church was landmarked in January, it was very much against the wishes of church officials, whose preferred plan was to bring in some revenue with residential development. Church officials have been campaigning for City Council action to overturn the landmark designation, but, DNAinfo reports, they've also moved on to plan B: selling the place. The building is on the market with no official asking price, and Reverend J.C. Austin tells DNAinfo the church "is considering offers that come in regardless of their source." Other options include letting a school or business use the space when the church isn't.

I guess you could have done that in the first place instead of putting forth a development plan that would turn the building into an eyesore. In fact, that would have been a simpler, less costly solution.

An effort to preserve the history of Carroll Gardens is being criticized for actually hastening the neighborhood’s gentrification, said opponents of a controversial city initiative to widen the area’s historic district.

“They just want to re-gentrify and force out whatever elements from the past are left,” said lifelong area resident and businessman John Esposito, who helped form Citizens Against Landmarks to thwart the Landmarks Preservation Commission’s nascent effort to extend historic protections to a larger segment of the brownstone neighborhood.

Esposito and others don’t feel protected — they feel threatened.

...resident Mike Cassidy, who said an expanded district will bring an undue burden on homeowners, who would be required to win the approval from Landmarks for every exterior improvement done on their property.

Ask Sunnyside Gardens residents if they've been gentrified out. Hell, ask any landmarked community if they regret having been designated.
Posted by Queens Crapper at 12:51 AM

"Ask Sunnyside Gardens residents if they've been gentrified out."

All those white people who lived in the gardens got to keep their homes?!

Thanks for pointing that out. As a Latino living on the other side of the line, I might have missed that until my lease came up for renewal.

White people? The Hunter College urban planning professor who lives there, Susan Mieklejohn, said she was against landmarking because it would mean that the diverse residents currently living there would be priced out. In SSG, 70 percent of residents rent, and 11 percent who live below the poverty line.

That's including rent stabilized tenants residents in the Phipps Towers.

It was important to include them and the Towers in the designation in an attempt to mask the overwhelming disparity between residents who live within Sunnyside Gardens (outside of the Phipps Towers) and the rest of the surrounding neighborhood.

White people can get gentrified out, too, you know. It happened in LIC. I don't understand your point at all. And this never came up during the designation process by those opposed to landmarking.