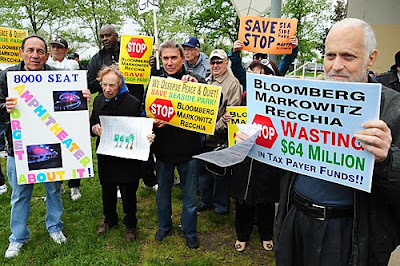 Borough President Markowitz’s controversial Coney Island amphitheater hasn’t even been approved yet, but the city is acting as if the fat lady has already sung.

On Thursday, the Parks Department announced that it is seeking proposals from venue operators to run the new, $64-million amphitheater slated to be built inside Asser Levy Park in Coney Island by 2012.

The agency’s formal “Request for Expressions of Interest” calls on prospective operators to “include year-round uses for the facility” and operate “10 designated locations for food carts, and three separate areas for food service, a commissary … and food storage containers.”

The venue must also generate “enough revenue — including food concessions — to cover the cost of both programming and maintenance” while “maintaining the same level of free concerts already offered at the current band shell” by the borough president.

Despite such a big operation, the project is not going through the city’s normal land-use review process because there is already an operating, though far smaller, band shell currently on the site.

Still, the city’s Design Commission has said it will not sign off on the project until an “environmental assessment” has been completed. It’s unclear when that will be, but the Parks Department is going ahead in seeking an operator, offering a site tour on April 16 and a bidding deadline of May 7.

Opponents have consistently taken their protest to Community Board 13, which has not weighed in — mostly because half of the board’s 50 members are appointed by the borough president, foes say.

“We have $64 million for an unwanted and illegal amphitheater while the Fire Department is called upon to reduce its budget by $64 million,” local resident Paul Sternblitz cried.

Posted by Queens Crapper at 1:08 AM

Marty Moose is a fat pompous, arrogant asshole! Just another self centered politician who wants to leave a legacy of big unnecessary projects in his boro. And he's just another "cheerleader" of Mayor Moneybags.

How is he still walking around without getting his add kicked? I hope Marty's projects fail miserably.

BP Borough Markowitz talks from both sides of his mouth. He dosen't want cuts in Fire, Police, Education, Libaraies etc. etc. but has no concept of freezing a vanity project of over $ 64 million when the City is in such dire economic conditions.
In addition, any prospective bidder
to run this venue & consessions must be told that there are 2 Jewish Centers within the 500 foot
Adminstrative Law for Sound Permits,which Marty has violated the past 30 years doing his concerts.
It will severely limit the bidders viablity as a year round concert hall.
In addtion, there are many public safety issues that have not been addressed. Where's the EA Marty ?
Marty's mantra is F$%K you , I'm King & I'll do what I want. I'm King & you are only the peasants. Rules, rules , rules, only apply to you not to the King.

You gotta be kidding me. Everybody is having to tighten their financial belts but they see fit to put this thing up? Wow there is something really wrong with this...

No doubt this shit shell will end up in the hands of Ticketmaster SFX-Clear Channel mob.
Both the the average person and local artists will be "locked" out.

BTW: The only shell not tainted by this mob and Delsner is the Tower Stage in Rye Playland.
(Great place to play BTW)

I love how Crappy consistently refers to this boondoggle as a "$64M potato chip".

This potato chip is the last thing this city needs and will be of zero use to the surrounding area. I wonder who is the developer that will get the government cheeze for this project?

Again, a failure of the preservation community to make their case and present it to the public.

But boy oh boy, they know how to send out notices soliciting donations.