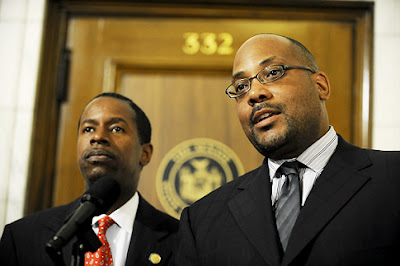 Three senior State Senate Democrats have been subpoenaed by the office of the state inspector general as part of an investigation into the awarding of a casino contract at the Aqueduct racetrack in Queens, people briefed on the matter said on Tuesday.

The subpoenas, which the Senate is seeking to quash, were issued last week to the offices of John L. Sampson, the Senate’s top leader, as well as Malcolm A. Smith, the Senate president, and Pedro Espada Jr., the Senate majority leader.

Austin Shafran, a spokesman for Senate Democrats, declined to comment on the Senate’s move to quash the subpoenas, which seek documents relating to the contract. However, legislative officials have bristled in the past over subpoenas issued by the inspector general, who reports to the governor’s office and runs an executive branch agency.

The awarding of the Aqueduct contract to a politically connected bidder, the Aqueduct Entertainment Group, has been mired in controversy almost from the moment Gov. David A. Paterson announced the selection in January.

On March 11, he announced that Aqueduct Entertainment would not get the franchise after all; state officials said the state’s Lottery Division had determined that it could not license some of the company’s investors.

Also from the NY Times:

Senate Democrats said on Wednesday that they would make public some documents related to the controversial awarding of a casino gambling contract at the Aqueduct racetrack in Queens, even as they waged a legal battle to quash subpoenas from the state inspector general’s office, which is investigating the Aqueduct deal.

A top Senate lawyer indicated that whatever documents the Senate does release to the public, they are unlikely to be as much as the inspector general is seeking, reinforcing the chamber’s unwillingness to make a full accounting of how it handled the Aqueduct bidding process.

The Senate leader, John L. Sampson, said on Wednesday that he intended to be open about his chamber’s handling of the deal, but his words were undercut by his office’s actions in court. Senate lawyers have sought to seal court proceedings as they fight the subpoenas, but their request was denied by a state judge this week.

And while Senate officials argue that they should not be subject to subpoenas from the inspector general, who reports to the governor, their counterparts in the Assembly are cooperating with the investigation.

Photo from the Daily News
Posted by Queens Crapper at 12:25 AM

Subpoena Jerry J. Love the idiot who works for Espada, got the job because of his mother Sondra Love.