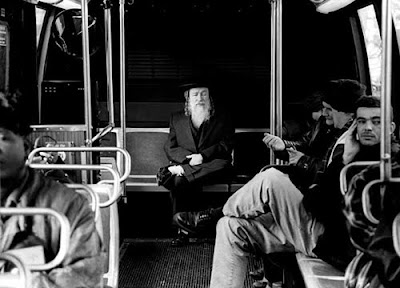 Bus gets a gentile push
By REUVEN BLAU, NY Post

Oy. A goy's driving my bus.

The city is looking for a new operator for a private bus company that caters to ultra-Orthodox Jews traveling from the kosher enclaves of Borough Park to the Hasidic haven of Williamsburg.

Some Hasidim fear a gentile company could take over the line and might run routes on Saturdays, fail to separate men and women riders, and stop giving discounts to yeshiva students.

"If it operates on shabbos, then people will completely stop using it," said Hasidic activist Isaac Abraham.

Of particular concern to religious riders is a phrase in the city's request for proposals that calls on the winning operator to provide service "seven days per week."

A Jewish-owned company, Private Transportation, has run the religious route for the last 37 years, but not during the sabbath.

Jacob Marmurstein, owner of Private Transportation, uses a board of consulting rabbis to toe the line. Men sit in the first four or five rows with women and strollers in the back.

Right now, the route begins outside Mendel's Pizza on 18th Avenue and 50th Street in Borough Park. Buses run about every 20 minutes.

Why is the City issuing an RFP for bus service to cater to a segregated religious group? Isn't this unconstitutional not to mention a waste of taxpayer money?

And I noticed that these folks take the subway without worrying that it runs 7 days a week...

Photo from Melissa
Posted by Queens Crapper at 1:05 AM

What is wrong with that?

Brooklyn needs a different, unaccountable bus service which flouts the City's transportation and parking laws (if you have driven this route, you know it), and incidentally violates the First Amendment, all on the City's dime.

When will the Hasidic subway open?

He probably meant the following.

A) the new operator is a Jewish-owned company

B) the city forces the operator to operate the bus on Saturdays (when, incidentally, it seems there will be little-to-no demand for the buses, anyways)

Since many religious Jews consider it distasteful to do business with a fellow *RELIGIOUS* Jew who desecrates the Sabbath by doing business on that day.

I believe that's what he meant by the "no one will ride it if..." that is quoted in the story.

This is a public service operation. Opt in or opt out to use it or create your own solutions with your own funds to achieve your needs.

Really - who give a crap what they do? Dont ride the bus then - so what then the city can cancel the contrat do to low ridership and save NYC money.

What next - buses with a section for Catholics who want to light candles - or the back reserved for Muslims with prayer rugs?

"Really - who give a crap what they do? Dont ride the bus then - so what then the city can cancel the contrat do to low ridership and save NYC money."

If the hasidim want public buses that keep the Sabbath, they can try Jerusalem, where no public buses run on Saturdays.

There is no one else but Jewish people in Borough Park who use this line?

Yes, this is what you can get if you deliver votes to the machine.

Taxpayer's money to subsidize your lifestyle.

Like so much of the machine's antics, spawned in the darkness of a smoke filled room, of course this is illegal. Seperation of church and state and all that. I am certain that this can be constested in courts.

Any atheists out there?

If they actualy prevent non-Jewish people from boarding then this should not receive public funding.

The Hasidic community has become extremely arrogant in NYC and has too many politicans in their pocket. The majority of Jews, like me, who are observant but not Hasidic are outraged by the forcefulness of the Hasidic community to segregate themselves from others. Complete arrogance and if this is true.

No, no, you're thinking about this wrong.

I thought we were all supposed to integrate. I guess some cultures don't have to.

One of my former co-workers who's Jewish told me that whenever those Hasidim on the street asked him: "Excuse me sir, are you Jewish?", he'd tell them: "Not if you are!"

Indeed. Why are tax dollars used to accomodate these useless inbred cretins who contribute very little to society?

If the city was accomodating a bunch of white Mormons, there would be rioting in the streets.

The city needs to stop catering to every ethnic group in this city. It costs the taxpayers too much money. If you come here, you need to assimilate and ride the buses and trains like everyone else. If you don't like it, hire a private cab.

We have this in Elmhurst and Maspeth. The Asian bus line. They run along the bus routes and only pick up Asians. I'm pretty sure the city subsidizes them because they turn a blind eye to them and don't bother them. It's racism at its best. They won't pick up white people, only Asians. It's been going on for years, but not one politician will do anything about it.

I think there is a lesson to be learned here people.

Bullshit. Let me tell them another old saw: 'if you lay with dogs, you get flies.'

The point here is, like the Hasidic Community, stay apart from the machine, unite your community into a strong voice, and don't take this 'compromise with the developer' crap.

This scares the machine shitless. They can't stand any group outthere that plays by its own rules. They cave in to try to bring you under the tent.

Look it worked for the gays and Hasidim. (who would ever think you could have a sentence with those two as an object, but hell, this is New York)

Community preservation, and the brewing public tax revolt against tweeding can learn a lesson from this community.

I thank them for showing us what is possible.

So who cares if they don't ride it. If there is no rideship they will shut down the route and we can use the money elsewhere. Why don't they live in isreal? At least you don't have to worry about being blown to bits on the city buses like you do in Isreal.

The Asian bus line. They run along the bus routes and only pick up Asians. I'm pretty sure the city subsidizes them because they turn a blind eye to them and don't bother them. It's racism at its best. They won't pick up white people, only Asians.

Don't know about Elmhurst and Maspeth specifically, but I've taken the Chinese-run bus from Chinatown/Canal Street to Flushing, and no one bothered me. I've also taken the dollar vans run by the West Indian/Caribbean guys in Brooklyn, and they picked me up and gladly took my dollar!

But I do agree that the city "turns a blind eye" to these folks, who obviously operate without insurance and proper licenses.

please don't judge all jews by these hasidem. they only represent themselves and only care about themselves. these people are the reason gentiles hate jews.

Wow. I thought that ended during the civil rights movement.

Just wait until we Muslims start demanding you kafirs pay for OUR separate buses!

You ain't seen nothing yet!

Man, I lu-u-u-v pizza. Is the slice at Mendel's worth the trip?

yeah, why do hasidic jews ask you if you are jewish? a guy asked me once in the bookstore and when i told him i wasn't he just walked away...what's with that? do they do that for a reason?

"I thank them for showing us what is possible."

If a white European group were granted such privileges, the Feds would swoop in and civil rights violations would be filed within days.

what's with that? do they do that for a reason?

They're trying to recruit non-orthodox and/or non-religious Jews into their brand of orthodoxy.

They even approach me occasionally, even though I look like a muscular teenager from Oslo, Norway.

georgetheatheist said...
This comment has been removed by the author.
Thursday, March 25, 2010

george: are you a fan of christopher hitchens by any chance? i've watched some fascinating religious discussions of his on you tube

Their state is funded by the U.S. yearly for many years to the tune of Six billion while this country is broke.

The hasidic's will get what they want as always or they will cry wolf.

Hitchins? Tres amusant. Didya see when he got waterboarded? ("A riot, Alice, a regular riot.") But a Johnny-come-lately, along with Harris and Dawkins.

yeah, i guess. but you have to start somewhere...the scales only recently fell from my eyes

I find just about everything this city does to appease the Hassids disgusting, disturbing, and a complete joke.

I agree with most of George's comments, but his 'always above the fray' attitude kinda makes him like a cartoon character.

Maspeth Mom says..
Go to Eastern Parkway where the Jews park on the meridian.

Tryand park your car on the meridian on Queens Blvd. and see what happens to your car. Tow & Ticket But not for the Hasid's.
They get special treatment in Brooklyn - not only from the NYPD but also from the DA's office. Not one talks to a Hasid if he's arreted until he has "lawyered up".
They also have a seperate cell not in with the rest of the population.