Putting "affordable housing" in the projects 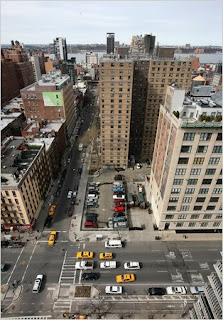 A small asphalt lot fills a nondescript corner of Chelsea, visually bland, wrapped in iron fencing and carpeted with a couple dozen cars. The only thing remarkable about it is that it exists.

The lot provides cheap parking for tenants in the adjoining public housing development, the Elliott-Chelsea Houses, an unlikely perk in a neighborhood synonymous with the trappings and traps of success.

But the lot’s valiant fight against the physics of real estate and government finance is about to come to an end. The city Housing Authority is selling it to a developer for $4 million.

The sale is part of a sweeping citywide plan to shoehorn up to 6,000 homes affordable to low- and moderate-income families, along with some shops, into parcels of public housing property deemed “underutilized” — mostly open spaces and parking lots. Set in motion in 2006, the plan is now hitting its stride, with 3,500 units either finished or in the pipeline, including four projects completed and another eight under way.

The initiative is rooted in practical needs and grander hopes for the future of public housing. The new construction will help Mayor Michael R. Bloomberg reach his goal of preserving or creating 165,000 affordable units by 2014. It will also generate money for the cash-poor Housing Authority.

With their parking lots, greenery and open space, the city’s housing complexes were often “under-built to what zoning would allow,” said Ilene Popkin, the authority’s assistant deputy general manager. Ms. Popkin said her goal was “to identify where the opportunities are for affordable housing development that makes sense.”

Sold-off parking lots will be replaced with new lots nearby, Ms. Popkin said. “No one lost a parking spot as a result of what we did,” she said.

At Elliott-Chelsea, the new units on the site of the current parking lot, at Ninth Avenue and West 25th Street, will be open to households with annual incomes of up to $150,000 for a family of four. Assurances that lost parking spaces will be offset by spaces in a garage beneath the new building have done little to temper existing tenants’ misgivings.

I don't understand how $150,000 for family of four is considered affordable. And who at that level of income would want to live mixed into the projects.

I also don't understand the point of building on a parking lot and then replacing them with new lots nearby. What is currently on the other lots? And why not build the affordable housing on them and leave the parking where it is instead of wasting more money? In fact, why do people in Manhattan need cars and how do people in projects afford cars?
Posted by Queens Crapper at 12:48 AM

"With their parking lots, greenery and open space, the city’s housing complexes were often “under-built to what zoning would allow,”

God help us...housing projects with greenery and open space. Quick, let's take that away..all that sunshine and green space could result in children growing up there getting better grades and becoming productive members of society in 10 years..

Hell, they build libraries and housing on playgrounds in Queens.

Go up 21st Street and see the new library and the Variety Club.

Nice try but affordable housing is not a priority in the city. It's all about luxury buildings.

It says the parking spaces will be replaced by spots in a garage nearby.

$150,000 IS high for the entire city. Why should taxpayers subsidize a Manhattan lifestyle when these people can live in an outer borough for half the price? And it doesn't say the spots will move to a garage. It says, and I quote, "Sold-off parking lots will be replaced with new lots nearby." NEW LOTS, not existing garages. So what is being torn down to accommodate project parking?

Yeah, I'm trying to figure out why anyone there would need a car. By the way, Zipcar exists as does Hertzconnect and there is another car-sharing company whose name escapes me right now a few blocks away.

For the rare occasions when using a car is unavoidable such as moving furniture, why not use one of these alternatives?

If they cannot build housing for someone like me, (under 35k) and ceiling must fall on my head, how do they have the money for upper middle class people who could afford market rate?

I don't think there should be subsidized housing for anyone.
The part of the article that you posted says the spots will be replaced by spots in a garage beneath the building. I guess you missed that part.

The mayors' mouthpiece, the NYT is so full of it when they constantly parrot his claim that he is preserving or creating 165,000 units of affordable housing units.

It is his own appointees to boards and politicians elected through his patronage that have allowed many hundreds of thousands of affordable units to be removed from the various programs such as rent stabilization and Mitchell Lama.

These empty promises of 165,000 "saved or created" units are just a smoke screen to hide what he and his kind are really up to.


They are also now licking their chops over new schemes the Mayor is cooking up to privatize the actual public housing projects themselves as well.

By the time they are through, what will be left for the more than 5 million new yorkers who earn less than $50,000 per year?

Will they all be forced into illegal basement firetraps?

That seems to be his intent.

"By the time they are through, what will be left for the more than 5 million new yorkers who earn less than $50,000 per year?"

Well, this is the payback the woikin' class gets for putting landlord friendly types such as Giuliani/Potaki in office.

Under the weakening of rent regulations instituted during their regime we have lost several hundred thousand truly affordable units.

Sure people were afraid of crime in the early nineties, they elected these cruds and got a stealth war on the working class.