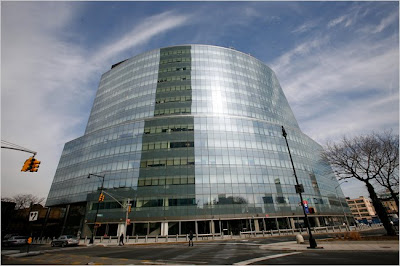 The City University of New York School of Law trains students to be public interest lawyers — the kind who battle bureaucracies and fight injustice.

The CUNY School of Law is to buy space at 2 Court Square in Long Island City, Queens.

But now, some of its teachers and students are taking aim at their own administration. At issue is the school’s plan to move from its current home, a former junior high school in Flushing, Queens, to a newer, sleeker building in Long Island City that Citigroup completed in 2007.

Last year, CUNY announced plans to buy six floors of the building, with about 260,000 square feet, for $155 million, or about $600 per square foot. That is more than the price paid for some office space in Manhattan last year, where 11 large buildings were sold. Their prices averaged $397 per square foot, said Robert Knakal of Massey Knakal Realty Services, a brokerage firm.

The law school deal, which has not yet closed, has aroused the ire of some students and faculty members. The student government passed a resolution last month demanding that the CUNY administration explain how the price was determined.

In their resolution, they demanded that CUNY explain the purchase “in a manner other than by mere comparison with the $250 million projected cost of construction of a new building.”

Ms. Weinshall, a former city transportation commissioner, declined to be interviewed. Asked for a copy of the draft appraisal, Michael Arena, a CUNY spokesman, said it would be released “upon completion of the sale.” A spokesperson for Citigroup would not answer questions about the deal with CUNY other than to say the company was “working toward an April close.”

In addition to the cost, some at the law school are worried that the deal will change the nature of the only publicly financed law school in New York City, a school known for its dedication to social justice and its rejection of corporate culture.

Sounds like another developer bailout to me.
Posted by Queens Crapper at 12:11 AM

Social Justice was the recent topic of a Glen Beck seminar on Fox News. according to Beck many at the "White House" are advocates of this ideology.

Reminds me of the time I was walking through CUNY's halls and saw posters of Che Guevara on the walls. This dump is a hotbed of Reds.

Most universities are hotbeds of extreme liberalism. By the time students guaduate they are fully indoctrinated with the core liberal values - more taxes, more spending, more handouts, etc.

They are only indoctrinated if they are too stupid to read history, think for themselves and remember what they learned in grade school. Better dead than red.

-You took it seriously.

Which is the funnier statement? Why?

The current leadership of the CUNY faculty union, which has been in power for the last decade, calls itself the "New Caucus" and is comprised of left-wing academics who criticize anyone who hasn't drunk their Kool Aid. Rather than trying to get better salaries and benefits for CUNY faculty, they spend time protesting the treatment of works in Mexico. However, there is now a counter-movement, which calls itself the "CUNY Allicance," which believes that a faculty union should not have a foreign policy and should concentrate on the bread-and-butter issues.

155M for 6 floors of a building that otherwise cost less than that to construct as a whole? Who is robbing who here and taking kickbacks? There is space in LIC asking 4-12st that is solid, well located and requires the landlord to renovate cheaply in exchange for 20 year leases.
We are in a DEPRESSION why are we wasting money on this space CUNY?

I take night classes at Queens College because I am trying to get a Bachelors.

They have been raising our tuition crying how the state is broke. They are in a perfectly good building right now, they want to spend $155 million on this kind of crap while tuition is being raised, professors are being replaced with teaching fellows, there are less classes and more students, the library and computer center is cutting hours while both are more filled with students etc.

As far as people at CUNY Law singing the Internationale - almost none of the undergraduates at Queens had even been born yet when that happened.

this is where the obama care I.R.S. armed agents will be trained to track down American citizens who refuse to buy obama medical insurance.

Most of these comments are ridiculous. Reds? What is it 1954? Get a life.