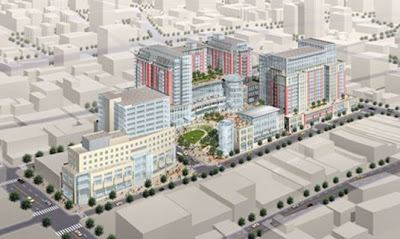 Controversy and intrigue is coming into full swing in downtown Flushing – again.

Municipal Parking Lot #1, a 5.5-acre city-owned parcel just east and north of the frenetic crossroads of Main Street and Roosevelt Avenue, has been targeted for a mega-project, Flushing Commons, and its affordable-housing sister component, Macedonia Plaza. On its face, Flushing Commons/Macedonia Plaza – which includes retail stores, residential units, a small park and a brand new YMCA facility - sounds like a creative use of public land. However, the devil is most assuredly in the details.

TDC Development Corp./Rockefeller Group, along with their status as chosen developer of Municipal Lot #1, recently constructed the Queens Crossing tower across the street and are deeply invested in future mega-development at Willets Point. For TDC/Rockefeller to win the design competition, the New York City Economic Development Corporation (EDC) entered into a detailed community benefits agreement with then-Councilmember, now Comptroller, John Liu in 2006. Among other things, the agreement called for a minimum of 2,000 parking spaces; reasonably-priced parking rates capped in perpetuity; a new YMCA with zero rent, full build-out and $5 million in programming funds; a movie theater; a bookstore; a business-class hotel; and $2 million in business disruption funding to help existing merchants weather the anticipated three-year construction timetable.

This agreement has been largely reneged upon by both TDC/Rockefeller and the EDC. Their current proposal is 400 parking spaces short; parking prices will revert to market-rate after several years; the hotel is in serious jeopardy; the bookstore – also promised at Queens Crossing – is unlikely; the movie theater has been nixed; and the YMCA, while still being built, will not have a rent-free facility or the $5 million promised. In fact, the YMCA’s 86-year old building on Northern Boulevard will have to be sold to a developer in order to make the new facility possible.

In 2007, Liu called the project “dead in the water” due to the lack of follow through from TDC/Rockefeller and the EDC. Flushing Commons then sat dormant for three years, until just after Liu moved into his new digs at the Comptroller’s office. The project, and Macedonia Plaza, began the public approvals process in late January, taking the entire Flushing community by surprise.

The lack of transparency for the biggest proposed development in Flushing since the 1960s is simply appalling. And, the fact that the Bloomberg administration would support this project in its current form – EDC is the actual applicant, not the developer – after violating the terms of agreement seems to be just another part of a disturbing trend that has been happening all over the city: mega-projects are approved at record speed while enforcement of the goodies for the community drags, diminishes or doesn’t happen at all.

Simply put, the residents and businesses of Flushing deserve the best possible development of our public land. At the very least, the commitments made by TDC/Rockefeller and EDC to the community must be honored, or the developer and city must go back to the drawing board. Additionally, the present YMCA building should be converted into a desperately-needed public school. And, without question, Macedonia A.M.E. deserves to get their land back that was so unfairly taken almost 60 years ago by eminent domain.

If nothing is resolved and this development proceeds as TDC/Rockefeller and the EDC intends, then three words will sum up what will have happened to Municipal Lot #1: Bait and Switch.

Paul Graziano is an urban planning consultant and life-long resident of Flushing. He is also a vice-president of the Queens Civic Congress, the umbrella organization for over 115 civic, homeowner, tenant and cooperative associations in Queens County.
Posted by Queens Crapper at 1:53 AM

All the amenities agreed to previously should be grandfathered in or the project should be canceled. In fact tax abatements should be removed since the City is broke and cannot afford to dole these out.

Welcome to the Sinking Boat said...

Sorry, bub, you said nothing when the template was stamped at Queens West

Sure, we know that eastern Queens regards LIC is a place where all the stupid knuckle draggers live anyway and the natural catchment for all that new development that can be diverted from all those leafy spacious estates (snicker) in the eastern part of our borough.

The only problem is that little word 'template.'

Now you are getting a dose of what we have to live with.

Now you can no longer pretend that the slash and burn of displacement doesn't exist because its not in your backyard.

Welcome to the boat - it might be designed for 15, but we can seat 25 easily - thanks to the efforts of the (tough and sharp!) preservation community (as it exists) in Queens.

Note they only talk about JOBS as the benefit.

But most of the money (the small part that gets down to the worker level after payments for 'commission' and 'materials') will flow into the pockets of illegal (mostly Asian) workers who, like at the hotels being built at Dutch Kills, are trucked in, fed at the site, and trucked 'home' at the end of a 12 hour day.

Yes, I heard that Baloney Maloney was contacted about those workers and her office refused to get involved.

(Besides stuff like that never happens in Manhattan where the real part of her district is. Who cares what happens out in the fields at the planation?)

who will pay for it?

has anyone even talked about what the new needs are?

BRING IN THE FEDS!

Yeah! Call up Peter Koo's office and tell Dennis Gallagher about your concerns. Just be careful. Are you a granny?

Now isn't that a self loving looking cameo snapshot of the "urban planner".

Why someone pick on Chinese? Discrimination?

I think the poject 'Flushing Commons' is a great addition/renovation to this underrated lil city. Not every process runs smoothly, there's bound to be some conflicts along the way. But we should keep our eye on the prize. What is good for Flushing, will be good for NYC itself. And it's about time people acknowledge another boro other than Manhattan.