Budget cuts do not apply to City Council 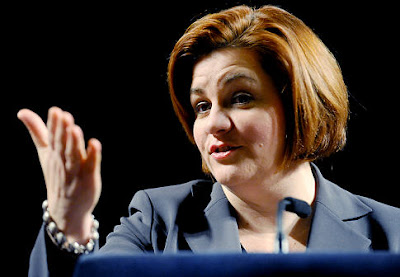 The City Council has some chutzpah.

As the rest of city government is being forced to swallow big budget cuts, the City Council increased its own new budget Thursday by 4.6% - to $52.9 million for the budget year that starts July 1.

That's $2.3 million more than the budget they approved this time last year, though five months later the Council doled out 4% raises to staffers.

Speaker Christine Quinn defended the new spending plan, insisting it's not an increase when the cost of the raises are included. "I would argue our budget is in fact the same as it was last year," she said.

And I would argue that council staffers don't deserve raises.
Posted by Queens Crapper at 12:45 AM

why are these lowlifes getting raises?

The Slush Fund Queen is in the thick of all this. What would you expect of her? She's a pig. The City Council should get a decrease in salary. Why does the average citizen have to tighten their belts, while the council members pig out on our taxpayer dollars? Wish we could impeach all of them. We really don't need a City Council. New York survived without one for years and the city was better for it. Oh, and we don't need a public advocate either. Pretty soon there won't be any money in the city coffers to pay these criminals. Can't wait for that day.

Oh come now, these people have "earned" their salaries! They are working hard to ensure that New York City retains it's position as a premier world class city!

I'm sure Christine Quinn is working hard to keep high paying jobs in the city, as we speak - HER JOB!!!

We have the best city council that money could buy!!!

What makes them so special? People are having such a hard time managing their dollars and these idiots keep looking for ways to tax us and spend our money. The rules obviously don't apply to them. Fire the lot of them. All they do is funnel money to their supposed charities, developers, relatives and friends. It's disgusting!

All of our government has turned into the New Royalty, from the Federal on down. They do this BECAUSE THEY CAN, and they are corporate fascist pigs.

They do this BECAUSE THEY CAN, and they are corporate fascist pigs.

2 different animals, but the same lineage.

She's a pig alright! In every sense of the word!!

Would NYC really miss out on anything if we simply did away with these overpaid, underperforming , useless poli"tick"ians??

I agree. They serve no purpose but to spend our money and take their share for themselves. We didn't have a council years ago and we survived. The are overpaid and useless. Can we vote to suspend the council?

I wouldn't let Christine Quinn give me as much as a lap dance, let alone her advice on budgets!

Just read all this hate spewing through the comments. What will it take for things to change? Elections? Conflict?

Anonymous said... Can we vote to suspend the council?

Sure, just like we voted twice on term limits. See how effective that was?