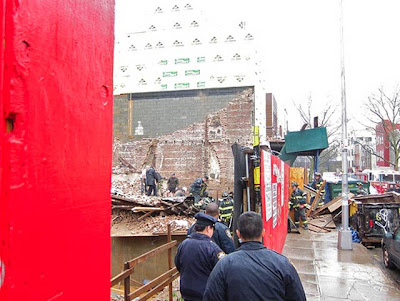 Four workers were injured when a building collapsed this morning in the Brooklyn's Williamsburg neighborhood, reports Channel 7/WABC.com.

The three-story building at 34 Conselyea Street was apparently under construction when it crumbled on Monday afternoon.

The fire department says four workers were pulled from the rubble, with one, a man in his 40s, rushed to Bellevue Hospital in critical condition.

Two others were taken to Woodhull Hospital in stable condition and the fourth remained at the scene, refusing medical attention.

Photo from Gothamist, which has more info.

There's also a partial collapse at 212 Ralph Avenue as per Brownstoner.
Posted by Queens Crapper at 3:52 PM

"The Brooklyn"? Someone's not from New York...

I saw the aftermath from the BQE. What a mess....

Collapse?! It was an art project! Shame on you, Crapper - ya square!

It was an outdoor installation! The one who denied medical help wasn't illegal, he just feels that borders are so passe!

well I'm sure some will say they hit the lottery! now they can go home and open a business and laugh at the Americans..

sometimes I wonder if they do this on purpose to run out any tenants and collect on the insurance.
every time there's a building demolition or construction the buildings adjourning it get cracked up or entirely destroyed. accidentally on purpose.

A couple of friends have had their gas shut off for over a year when the building next door collapsed. their building had cracks in the foundation. but... so many people live in places with huge cracks every single day.

The inspectors from the Department of Buildings were uninjured since they were protected by a blanket of money.

The building that collapsed was undergoing renovations. Illegaly as they only filed an alteraration permit rather than a new building permit. However inspectors cannot be everywhere as they are running to bogus "A" priority complaints.
And by the way, how many cops are actualy present when a crime occurs, like the buildings dept. they respond. It's re-active rather than pro-active system.
Live with it !