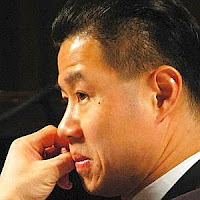 While Attorney General Andrew Cuomo has cracked down on the corrupt use of pension-fund “placement agents,” City Comptroller John Liu is cracking open the door for the return of the shady practice.

Liu, who manages investment of the city’s approximately $100 billion in pension funds, is urging the boards of the five retirement systems to lift a ban on the backroom intermediaries, who collect fees to help investment firms get lucrative business with the pension funds. Placement agents typically collect 1% to 2% of the funds they bring in from city and state pension systems. The fees can easily reach $1 million or more per transaction.

Several investment firms hired by the city pension systems have used Credit Suisse First Boston as a placement agent in the past. Liu’s new chief investment officer, Larry Schloss, resigned as chairman of the firm’s private-equity arm in 2003. Liu’s office said Schloss, whose city salary is $224,578, oversaw the placement agent division, among others, at Credit Suisse, but denied any conflict.

“Larry’s financial expertise makes him uniquely qualified for his position,” a Liu spokesman said. “He holds no stock in Credit Suisse, and left there more than five years ago.”

Uh huh. This is the Queens Tribune's Person of the Year and Queens Civic Congress' biennial Civic Convention and Luncheon keynote speaker.
Posted by Queens Crapper at 1:34 AM

This City knew well before the election who they were voting for.

They deserve what they are going to get.

To say nothing about getting a position in every photograph the boys can get him in.

Look! The guy in the corner looking sheepish and slightly confused.

Its the 13th Apostle!

Lui always has been dirty:( Always will be dirty:( I'll never forget when I went to him for help he showed up for a photo opt, and we never heard from him again!!! Just remember Lui everything you do in the dark will come to light one day:)P.S. Don't you just LOVE what he did for Flushing!!!! NOTHING!!!!

While reading this week's Queens Chronicle, I came across this article of interest:

While Liu was a city councilman, he attended the announcement ceremony hosted by Mayor Bloomturd declaring that the Flushing Airport property in College Point was going to be sold to a Korean warehousing/wholesale operation. Tony Avella, the councilman for that district, was not invited. He was busy trying to protect his community from this inappropriate project.

In the article, we see Peter Koo joining the City (Liu) and State Comptrollers for a photo op in College Point. Wait a minute! Isn't Dan Halloran now the city councilman for that district??? I'm just sayin'...

The fox is guarding the hen house. Did anyone expect anything different?

Nice photo. Hey Johnnie, while you're at it...pick me a winner!

I tried my best to spread the word on this asshole Liu, This little prick is a 3rd world bitch that has no integrity or compassion. I don't understand why people are so fucking retarded and voted for him

Nice photo. Hey Johnnie, while you're at it...pick me a winner!

Good one. You won that one by a nose!

Johnny boy...you could use a little Rogaine and lay off the char shu bow.

You're getting chubby cheeks on both ends.

Wait until this butt hole runs for mayor!

Yeah...but Liu has to give a cut of that Taiwanese loot to the Staviskys, Parkside, etc.

Toby has got some sizable war chest...one of the biggest after "Mr. Comptroller's"!

Toby has got some sizable war chest