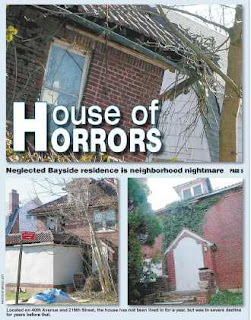 At the intersection of 40th Avenue and 216th Street in Bayside, what was once an urban tragedy has become urban legend: a bereaved widow, whose firefighter husband died in the line of duty, secluded herself in her home, leaving its exterior vulnerable to four decades of decay and only a specter of herself in her neighbors’ imaginations.

According to East Bayside Homeowners Association President Frank Skala, Louise Miller moved into a nursing facility just last year, at which time some neighbors assumed the octogenarian had died. Prior to that, Miller’s son Eric, who lived only a few blocks away, had attended her lawn in haphazard fashion; somehow, he overlooked the blue Buick Skylark parked there for 15 years and the overgrown trees growing on the building’s southwestern wall.

Today, the ramshackle, brick, one-family house is an eyesore, albeit a mysterious one, to the otherwise manicured residential community. The doors and windows on the ground floor have been cemented over because the Department of Buildings found the structure open, vacant and unguarded. The second-floor windows are shattered, and the building, abandoned by its one human resident, is now inhabited by raccoons and squirrels.

Skala described the structure: “It looks like one of those apocalyptic movies, like a hydrogen bomb went off.” If the house had been maintained, it would in this real estate market be worth about $800,000. “Now, it’s not worth 70 cents,” Skala added. The property’s current condition and assessed value of $21,713 lowers its neighbors’ market values.
Posted by Queens Crapper at 12:43 AM

I have assume that this woman had dementia. Why was she allowed to live in squalor like this? Her son did not take care of the place - or her? The neighbors turned a blind eye? No one called Social Services or whomever it is that is supposed to look out for people like Ms. Miller.

A town without pity - I am stunned that this is a home in Bayside.

If the assessment is so low then let the neighbors collectively buy the property.

Skala (the apparently self proclaimed mayor of Bayside) always has a bug up his decrepit old ass about one thing or another.

Did he personally help do something for this sad woman?

He just struts around Bell B'lvd. like Santa Claus in shorts surveying his domain in the summer.

Hello there Frank...
got any marbles left?.

Such houses can be found all over our borough. Their owners simply own the properties, but do not live in them.

Ira Glickman, where are you?

"If the assessment is so low then let the neighbors collectively buy the property."

I don't get it though - there is NO property in Bayside, or the surrounding areas like Whitestone, Little Neck, etc. that's NOT worth big bucks.

The contractors knock all the old houses down anyway, and as you know, it doesn't matter how good the condition is - it's coming DOWN.

This sounds to me like some cretin is trying to take advantage of this sad situation.

Sigh - even is someone DID call Social Services, it's darned hard to DO anything if the person refuses help

My Mother In Law's house was features on Forgotten NY as a house like that. We did all we could for her - she refused us entry, refused social services, and they were unable to get 3 MDs to declare her a danger to herself.

It litterally took us YEARS of court dates to get to the point where SOMEONE was given control (a grifter had latched on, he used her money/wishes to fight in court - and made sure that none of her children were allowed control)

This is all an outgrowth of the deinstitutionalization movement of the 1960s, which WAS mostly a good idea, but the courts have come down to saying "who are WE to tell people how they are supposed to live? If he/she is not in immediate danger, they have the right to live as they want"

In this case, it doesn't sound like the son did much, and it's hard for even a family member to get control, and if either of them is together enough to fight the neighbors, good luck getting anything done. I know we talked with the neighbors, got them to help us with the courts, got evidence, photos, had the police and EMS, APS, etc come - nothing they could do till MIL was bad enough that they ruled she could not live on her own (and that took many court dates over months)

Wow - that is quite a sad tale.

I know also from personal experience that our elderly can be very difficult to deal with when it comes to their care - I sympathize with you.

I am equally appalled by the grifter and our courts! What a nightmare that must been!

There are a lot of well meaning people involved in social services and the court system - unfortunately, as you have pointed out, they can go do what is allowed by law.

I think the majority though in the system are complacent. I also think that LAWYERS involved in elder law deliberately create these courtroom battles for their own self-aggrandizement.

Maybe Skala could retain Carrozza, now that she has some time on her hands, and petition for an Art. 81 guardian for poor Ms. Miller and her son, who probably inherited his mother's mental illness. Heck. maybe Carrozza will do it pro bono, to make amends for all the harm she's done to her district!

I lived near the property for about 35 years and heard the story. Once I saw a woman who was middle aged speaking to what seemed like a social worker. She wore sunglasses and seemed uncomfortable outside the home. I saw two very tough and wild looking kids going in and out of the house for several years in the seventies. I think they had a pit bull.