Some people love living on top of each other 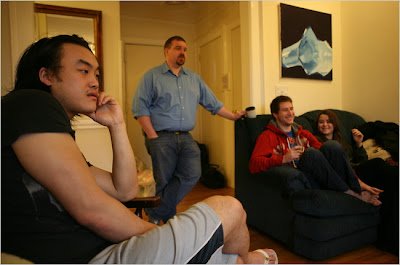 Doua Moua, 23, played a menacing gangster in a Clint Eastwood movie, but Mr. Moua swears he really is a nice, gentle and rules-abiding fellow. At least he was until he moved to New York City and unwittingly slipped into a world of lawlessness.

Mr. Moua lives with five roommates. And in New York, home to some of the nation’s highest rents and more than eight million people, many of them single, it is illegal for more than three unrelated people to live in an apartment or a house.

The law, for decades part of the city’s Housing Maintenance Code, is little known, widely broken and infrequently enforced. Three citations have been issued since July, according to the Department of Housing Preservation and Development.

When the law is enforced, it is usually because of a complaint from a neighbor or because inspectors spotted a violation while responding to a maintenance problem. The violation is rarely written up unless it is accompanied by a host of others. Rarer still are the tenants who call up the city to turn in their landlord.

The lax enforcement might not be a bad thing, since a sizable number of the city’s denizens, especially its penny-pinched younger residents, have found living with more than two others a financial necessity. According to the Census Bureau’s 2008 American Community Survey, nearly 15,000 dwellings in the city housed three or more roommates who were unrelated to the head of the household. Experts say that number is almost certainly underreported.

Mr. Moua, who played Spider, a bandana-clad villain in “Gran Torino,” never thought twice about moving into the immaculately renovated four-bedroom apartment in Hamilton Heights that half a dozen people call home. The place is lined with track lighting and has two bathrooms. His room costs $850 a month.

He could live by himself in a studio in an outer borough for that much. Silly people.
Posted by Queens Crapper at 12:07 AM

What an arbitrary and unenforceable law. What's the harm if 4 "unrelated" consenting adults want to rent a 4BR apartment or a house?

"What's the harm if 4 "unrelated" consenting adults want to rent a 4BR apartment or a house?"

That's true. So what if I want to subdivide my apartment and rent it out to people I don't know and who don't know each other? That couldn't possibly lead to anything bad...

They aren't subdividing the apartment!

I think it is great that they are doing this. I assume everyone has their own space. The couple obviously share one bedroom and the others have their own rooms.

Great modern communal living! They can share the food bills too. More people should do this - fk the law. Keeps Manhattan too from becoming a "wealth only" tourist spot more than it already is.

I fail to see how this is positive.

What other illegal things does Babs approve of?

My dear, these are not the type that eat at home. They live like sardines in a can so they can spend all their money on bars and restaurants and then blog about it.

"What other illegal things does Babs approve of?"


Babs is hot, leave her alone!

Well here's the kicker...everyone's house has a limit on it. You have a C of O which lists how many people each room can accommodate.

I guess you folks would like to go back to the days of flophouses and boarding rooms.

He could live by himself in a studio in an outer borough for that much.

Sacre bleu! The outer boroughs? I might as well live in Zimbabwe!

They live like sardines in a can so they can spend all their money on bars and restaurants and then blog about it.

So, what's it to ya? I eat out 5-7 times a week, and I go out drinking at least 4 times. And I'm not eating in any of those "vibrant" restaurants along the #7 line.

You should see the quality of women that I "hook up" with every weekend! It's a big problem though when I try to bring home some drunken skank to my apartment, and have sex on the couch.....

Thanks Babs, it really is great! You should try it! It's EXACTLY like you see it on TV! Just like Seinfeld and Friends!

All my friends are just like Joey, Chandler, Elaine Benes, and Jerry! I even have a "kooky" neighbor named Lino! He's just like Kosmo Cramer!

"I even have a "kooky" neighbor named Lino! He's just like Kosmo Cramer!"

Maspeth is for "Archie Bunkers"! These cats are WAAAAAAAY cooler than that.

Way too many people for me but I guess it works for some people.

And why would Duoa Muoa want to live in the outer boros? Everybody wants to live in Manhattan these days regardless of extremely high rents.

What does that mean "everybody wants to live in Manhattan these days"?

We're on a QUEENS blog. Most of us chose to live here and don't want to live there.

We're on a QUEENS blog. Most of us chose to live here and don't want to live there.

Agreed. I saw an ad for a 2BR apt in a shit part of manhattan for MORE than my mortgage for a 3br semi-detached house in a nice part of queens.

Someone told me once that the law was created because of whorehouses.

Maybe these people dont' have a daddy or a stud to pay their way.

Just hope that sonny boy will live this way in 20 years. Its getting harder and harder to make a 'honest livin'. eh?

Eating and drinking out all the time? Now! Now!

Spend some some time in the shineshine! Get in touch with your envirnment! Your life will improve a quantam leap!

"What other illegal things does Babs approve of?"

Smoking pot - although I DON'T.

Babs is hot, leave her alone!

Anonymous said: "As long as the house or apartment is legal (no subdivisions), the people should be left alone."

Absolutely - I also have to remind people here that past generations had a LOT of children which they lovingly crammed into tiny Manhattan apartments.

George Burns said once that he was "one of 13 children living in a one bedroom apartment in the Lower East Side. We all slept on the floor! Today we call that child abuse".

In comparison, today's family consists of 1-2 children, if any.
This generation is also holding off on starting families - therefore to share space with others is a great idea and should be encouraged.

My aunt once told me that during the Depression people with houses had boarders to help make end meet - every room was rented. People met in the kitchen for meals.

Sharing space is a VERY smart way to get through tough times, help out a friend or relative, OR simply for companionship.

I also have to remind people here that past generations had a LOT of children which they lovingly crammed into tiny Manhattan apartments.

Like this wonderful family that lived in the Bronx:

But don't mention the word "polygamy", or else they'll accuse you of R-A-C-I-S-M!

"It's all fun and games until someone gets hurt."

Deke - tks for the links.

The first story about a Bronx Muslim woman from Africa who lost 5 of her 7 children in a fire is as much a story of hope and courage as it is tragic. It is also an excellent reminder of the perils of space heaters - I won't use them myself - I'd rather keep the thermostat low and pile on extra layers of clothing and bedding on very cold night. Large families have major challenges in today's world and space surely would be one of them.

The second artile on polygamy in the Muslim New York community is troubling and certainly also brings to attention the similarities of all the more fundamental religions in the world.

Unlike the Christian polygamists, the Muslims do go to school with and live in neighborhoods with people from less religious or non-religious backgrounds which introduces them to another way of life. I believe they will be able therefore to break away from tradition more easily to enrich their own lives and the lives of their children.

I am strongely opposed to polygamy because of the practice of child brides, the banishment of young boys from the community, the undemocratic society that they have created in America and how they segregate themselves from the rest of us.

The Dutch do it better - a few years back they married the first polyAMORY family - which consisted of one man and two wives. The difference? . . . each one is financially responsible for themselves only - in case of divorce, there will be no alimony, BUT child support will be shared by ALL. As long as the marriage is of equals, I think it's fine - but for someone else - not for me!

Rising Junior said: "Thanks Babs, it really is great! You should try it! It's EXACTLY like you see it on TV! Just like Seinfeld and Friends!

All my friends are just like Joey, Chandler, Elaine Benes, and Jerry! I even have a "kooky" neighbor named Lino! He's just like Kosmo Cramer!"

This was WONDERFUL! I'm still laughing! YES - I admit it - this is EXACTLY how I see it!

And when I get older - I can see myself fitting very nicely into the "Golden Girls" living arrangement (warmer climate, great shopping, alimony and an occasional date) - ideal!

Rising Junior said: "It's a big problem though when I try to bring home some drunken skank to my apartment, and have sex on the couch....."