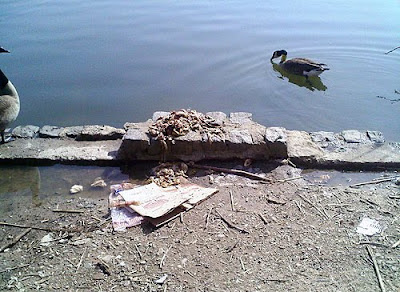 On Friday morning, Anne-Katrin Titze and Ed Bahlman’s discovered a chicken neck and head — disembodied! — on their daily walk.

Nearby, Bahlman found a large box with two latex gloves inside. Beside the box were feathers — likely from the chicken — strewn about the banks of the lake.

Bahlman’s friend, Bonita Makuch, came upon entrails piled on the edge of Prospect Park lake. Some of the guts had fallen into the water — pieces of viscera were peaking out like fleshy glaciers. A chicken’s carcass floated nearby.

“It was quite disgusting,” said Makuch, who was unsure if all the tripe belonged to only chickens. “With a pile that big, it seems to me you’d have to do a lot of killing to get that many guts.”

Susan Yuen, who first came upon a similar revolting crime scene in the same area along Prospect Park southwest last week, saw the intestines in the early afternoon and immediately alerted park officials. A park employee — who would not give his name — quickly cleaned up the mess, pulling two chicken carcasses out of the water and throwing it all in a trash bag.

The incident marks the second gore-fest at Prospect Park in two weeks. Last week, The Brooklyn Paper delved into the mind-bending mystery of a bloody chopping block, smashed turtle shells, and an arson — all of which appear to have been related.

"Unless someone catches someone in the act of either abusing an animal or littering — which this gory stuff is — there is little we can do."

SO CATCH THEM JACKASS. Do you know what a stakeout is?
Posted by Queens Crapper at 1:52 AM

one word 'Santería". In Charles Park in Howard Beach, the shorline is littered with dead animals and offerings.

This sounds like dumping from these sacrificial religions - but in quantity.

It's also a health issue and clearly it should be taken seriously by the City Agencies and the PD.

Even if they catch the person or persons involved, the sacrifice of chickens is part of religious ritual across the globe. So celebrate their diversity and just deal with the mess, the disease, and the rats.

It may be part of religious rituals around the globe, BUT NOT HERE!!! Uncivilized!! Obviously their ashamed of what their doing because they do it secretly, What else are they murdering,watch your children they, who ever they are love the defenseless:( I'm sorry but leave that shit where you come from, WE DON'T NEED OR WANT IT HERE!!!!

Crappy, could you take that photo down until I've had my morning coffee?

Diversity is our strength!

It may be part of religious rituals around the globe, BUT NOT HERE!!! Uncivilized!!
----

1. if they become citizens, they vote machine.

2. they drive out whining quality of life people (interesting to see how the boys in the clubhouse responds if this was found on bike lanes in next to an idling train in the railyards)

3. if they become citizens, they vote machine.

4. they have special needs taken care of by our taxes and great photo ops along with great headlines for the hacks.

5. if they become citizens, they vote machine

What's worse? Chicken entrails or Carlos Santana? Joe, are you reading this?

Yep Santería"
I have known about this for a wile. Many times the illegals put the chickens or small animals blood on handcuffs before they completely kill them

George:
Santana ? Oh F_ Hell don't even mention that idiot. I worked his shows at Jones beach and to tell you the truth I don't know whats worse. What misery
He does more babbling over voodoo and spiritual Bullshit then playing.
As usual it always rains cats and dogs and even sideways on Santana.
As our $400,000 sound console and 8000 angry Latinos start getting soaked he goes into another 8 minute lecture about tears from god. His road crew were also a bunch of burnt out dope smoking hippies who drank all our wine

Crapper said, "SO CATCH THEM JACKASS. Do you know what a stakeout is? "

Stakeout? I thought you said takeout!

Every full moon in Southold there is a stakout just about everybody has guns.
The poaching, trespassing and stealing has stopped.
Between that and Steve Levy the turd world garbage flocked back to the South Hampton woods to find the churches broke.
Many have deported themselves by getting drunk pissing and kicking police cars demanding rides to Guatemala and Mexico.

It was Carlos Delgado.

I think Carlos Santana is BRILLIANT - he is a MASTER guitarist. His music needs no words to be understood.

The jazz rock fusion movement - of which he is one of the genre's creators - is one music history's finest periods.

Back then YES Agreed
NOW its $68+ Ticketmaster to hear Carlos Santana preach more B.S. and religion then music

I can get that talk for free from my old friend Bugs at the Fresh Pond M station. Bugs will even give you a personal blessing for $2.
(I'm told its a good deal)

For those of you who don't know: Bugs was a guitarist from Ridgewood who did to much acid one day ending up working the Queens Village Hilton a couple years)

ok joe - whatever. I haven't seen him perform in years so what do I know.

Do you remember Nicki's Part II in Glendale(?) BEFORE it became a gay club? Had some really great hard rock from locals back in the day.

Joe - "For those of you who don't know: Bugs was a guitarist from Ridgewood who did to much acid one day ending up working the Queens Village Hilton a couple years)"

And for those of you who don't know: too much acid does NOT make someone a nutjob. If that were the case Joe, "Bugs" would be one of many in Ridgewood. Someone CAN of course have a bad trip and do something stupid like jump off a building - but, one has to be under the influence.

This guy most probably was a nut who ALSO used drugs - unless he was a Vietnam veteran who got shot in the head or had a breakdown - Ridgewood was very hard hit by the draft - simply because of the numbers - each household had a lot of kids AND the nab was middle class.

Coke could definitely give you nerve damage which could make you behead someone like in the case of OJ - but, out of all the illegal drugs coke/crack is the most dangerous over the long term.

Babs:
Bugs did do everything everything Babs, he particularity liked angel dust. Bugs lived on Stephen street and Cypress
--Climbed up on the roof one day naked hollering at people below saying he was Jesus Christ.

Dont remember a Nicki's Part II or any Gay club in Ridgewood or Glendale.
They would have been burnt down or somebody shot when I lived there.
There was a full blown riot and people beaten, equipment smashed at the Oasis theater simply over punk rock concert with "The Dead Boys" and "Richard Hell and the Voidoids"
In my day the only place I know of a band could play in Glendale was "The Wreck" (Glendale Lounge) owned by this Good-fella named Jack. Bands like Hyway, Alexis, Silversmith, and some Greatful Dead clones forget their name
Jack sold The Wreck along with the old hall next door and moved to Florida, It became The Cooper Ayle House. Last I saw it the original bar and band room, kitchen and office was incorporated into it.

Babs -- Nicki
I do remember some after-hours place on Myrtle across from Finest Supermarket property.
I think the owners name was Nicki, I believe he had a heart attack around 1985.
Must have did to much of Kenny Frito's product

Joe - it was during the late 60s that Nicki's Part II was a rock club - it was a converted house - I recall walking down a long pathway to the front door. I was only there twice so I don't remember much else. There were a LOT of rock clubs then, and my friends and I spent a lot of time in the old Monastery on Queens Blvd. OR we went to Long Island Hammerheads, My Father's Place - there were too many to even name here.

Most of the boys in Ridgewood had nicknames then - Tony the Hat, etc. Did YOU have one too?

Anyway - if Bugs was doing Angel Dust - YES that would get someone "Buggy" I guess.

I know what your talking about now. Its on the Forgotten NY Websight.
I think it was called "The Station" it was near the railroad tracks in Glendale.
I was there one Christmas eve around 1977 between hopping house partys
Its back to a house now...its very old

I played at both MFP and Hammerheads is Islip and yep had a nic-name everbody did .
I was a member of the 60th lane Greenhouse gang (Ridgewood). The people on those surrounding loved us. There was never a robbery in the area and we never resorted to violence or littering.
We recently had a reunion in Howard Beach.

Duh I remember now !
Emailed and old buddie "Flaky Freddie" who grew up in the 60's.
He says there were 2 Both a bar and a old Hotel.
They date back to the 1800's where lonely Montauk line railroad workers and Camp Montauk servicemen hooked up with ladies via a long path to a side door
The B52s rented and shot the "Love Shack" video before the Hotel was fully converted to business space.
The bar then called "The Woods Inn" became a full private home.
http://www.forgotten-ny.com/STREET%20SCENES/glendale/21.lirrglendale.jpg
Despite what went on its far better then dead animals and offerings from these new people

well thank you and Flaky Freddie too.

I love "Forgotten New York" - I appreciate the link - it's truly too many years for me to make a positive identification though! Great pics of a great nab!

You must've been pretty good to play those clubs Joe - good for you!

Joe said: "I was a member of the 60th lane Greenhouse gang (Ridgewood)."

Now you're really jarring the cobwebs of my brain! My friend was a member of the Halsey Bops(?) - something like that anyway. They sang doo wop on the street corners all over Ridgewood!

Uncle Mousie's Halsey Bops are still around some lurk here along with some Ducky Boys although a bit aged.
They were huge
http://www.gothamcenter.org/discussions/viewtopic.php?id=1127