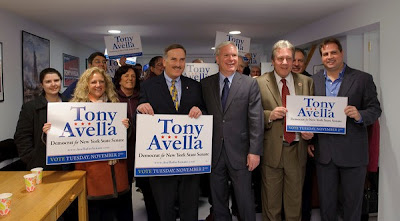 Photo by Steve Garza on Smugmug

"A real reformer" is having a fundraiser sponsored by Joseph Crowley? Is this an April Fools joke?
Posted by Queens Crapper at 1:28 AM

I'd vote for Tony is he was running for anyone other than Frank Padavan. Tony's arguments against taking lulu's while he was in the city council is striking when compared to David Weprin, who is supporting him, since David never failed to accept his.

I don't think Frank's got anything to worry about. As long as David's supporting Tony, Frank's gonna win.

Right...I can eat at the Four Seasons for that and not worry about getting heartburn looking at Crowley's face while I'm trying to cut the rubber chicken with my Bowie knife.

My money goes to Padavan!
Sorry Tony the phony!

No wonder the county (and country) is in such lousy shape if this is the best the Democratss have to offer.

The Republicans aren't offering anything better either for that matter!

you could come up with whatever philophy you want. in gennaros race, the weprins laid down. with tabone stupid idea of running freidrich aganist them, who lost by 40m points twice, you will now have the weprins weighing ion and knocking out padavan for good. and avela will beat padavan in his own distict, so this is a padavan lose by at least 15 points.

it will be humiliating.

Tony went to Crowley for help to get elected seeing how being an outsider (and not building a parallel base) gets you nowhere.

He was bit by the political bug and wants back.

Crowley sent him on a fools errand to knock off one of the few good people in government thinking that Tony will lose, and the pols can then smear him with the label as an 'unelectable loose-cannon loser'.

The sad thing is that Tony will now lose the support of the 15% who think he is principled.

Padavan should retire instead of being embarassed. This will be a twenty point loss.

yeah that a good one. this is a big joe crowley set up.

Frank must be shitting in his diapers.

could crowlety theory except avella went against liz crowley. there is no love for him at county. makes no differnece.

colonel padavan and deputy friedrich will have plenty of time to practice goosesteping at fort totten come november.

1) there are no black voters in the district. obama did ok, not better than kerry or any other democratic presidential candidate. the theory that gennaro came within 200 votes because of obama is a completely wrong theory. and those obama voters, didnt vote down the line. they voted obama and went home.

2) gennaro came within 200 votes cause it was the first time someone ran an actual race against padavan.

5) the anti incumbency furor will kill padavan. avella, the independant outsider running against padavan who is there 38 years and has recived over $350,000in lulus.

6) the district has changed and not to padavans benefit.

"colonel padavan and deputy friedrich will have plenty of time to practice goosesteping at fort totten come november."

Maybe. Until Avella gets in there and exposes the massive corruption going on over there for years. I woinder what all those hacks have been doing with the multi million doallar "improvements." I wonder how many contractors gave contributions to Padavan.

Do the words indictment mean anything ?

Since Padavan wrote a letter in support of Brian McGlauglin, maybe he could get a cell next to him ?

Friedrich could smuggle in food up his butt.

Tabone would enjoy that.

my my my 'honest joe' has his bhoys posting away here.

he he he 'honest joe' watches this site.

Tony has more enemies among Democrats than Frank does. His frequent alliance with Charles Baron in the Council will come back to haunt him.

To the anti-incumbency crowd and endorsement by Joe Crowley is the kiss of death for Avella. Crowley voted for cap & trade and waxes poetic about Obamacare which is nothing more than a legislative IED (improvised explosive device)

I wouldn't vote for anyone who was endorsed by Joe Crowley. They don't get more corrupt than him.

The Charge of the Avella Brigade
by George Lord the Atheist

"Forward, the Avella Brigade!"
Was there a man dismay'd?
Not tho' the politician knew
Some one had blunder'd.
Theirs not to make reply.
Theirs not to reason why,
Theirs but to do and die.
Into the valley of Padavan
Rode the Avella six hundred.

Flash'd all their sabres bare,
Flash'd as they turn'd in air
Sabring the gunners there,
Charging an army, while
All of Queens wonder'd.
Plunged in the battery-smoke
Right through the line they broke;
Ragusa and Tabone
Reeled from the sabre-stroke
Shatter'd and sunder'd.
Then they rode back, but not,
Not the Avella six hundred.

I think Tony Avella will be a breath of fresh air.

I can't support someone who thought Bloombucks was doing a fantastic job with our schools when he spoke on the Senate floor last summer regarding extending mayoral control.

Next time Frank, speak to an EDUCATOR about our schools. They'll give you the real deal.

With Cuomo leading the ticket and a weak republican running for Governor, Padavan will have a very tough race this year. Plus, the gays will raise millions for Avella, they want revenge.

Yeah, thats Padavans and Tabones big camapign. Charles Barron and a street renaming for some guy in Brooklyn. Yeah, all the Dems will walk away from the Democrat and all the people who love Tony in his Council distirct will walk away from him over some weird thing having to do with nobody who represents the borough, let alone the neighborhood. A street renaming. In Brooklyn. From 5 years ago.

Padavans and Ragusa did such a good job claiming Avella poisened kids at the College Point Sports Complex.

Padavan must be shitting.

1) Tony Avella is the most popular elected officail in the distict, other than Padavan.

2) He represents 60% of the Senate distict. Jim Gennaro represented 3%. Yes, ladies and gentlemen, that THREE PERCENT !!!! A complete unknown.

3) Avella represents, and will beat Padavan, in his base: Whitestone, Bayside, Little Neck, Douglaston.

4) Cuomo vs Lazio ? Who is running against Schumer and Gillebrand ? Dan Senor ? Some TV guy. Flip Wilson is running for Comptroller ?

5) Padavan is old in an era of anti-incumbency.

First Kipling, now GeorgetheAtheist. Good one George, thanks for that!

Re your tag line: "A real reformer" is having a fundraiser sponsored by Joseph Crowley? Is this an April Fools joke?"

I say: Will the real Tony Avella please stand up?

Padavan is a great guy and has done tons, but it is time for a breath of fresh air and honestly I see Tony Avella being just that.

Padavan is a good man.

Crowley is a slug.

No matter how many of the bhoys you can send to post here, everyone knows that.

Sorry, Tony, when you sleep with dogs you get flies.

Tony "the phony" Avella should get a job!

Padavan has been up in Albany for 37 years. And people want to send him back up there? He's 75 years old, time for him to be put out to pasture. His wife was so tired of it all, she hung herself - and that was 15 years ago! Time for Padavan to go.

I don't care if he's replaced by Avella, Genarro or whoever. Even another Republican would be better. 37 years is enough!

I don't care if he's replaced by Avella, Genarro or whoever. Even another Republican would be better. 37 years is enough!
---

The same can be said about the Mannes-Manton-Crowley machine.

Oh give us a break! Manton and Manes were not part of the same machine, the two men were bitter rivals.

They opposed each other several times for the county democratic leadership.

Whatever one thinks of Manton, it's unfair to try and tar him with Manes sordid crimes.

Crowley is the kiss of death for Tony.