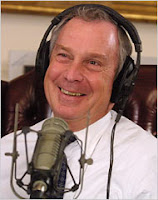 That's the claim Mayor Bloomberg made on WOR radio Friday, saying "there is no crime on the subway from a practical sense."

Bloomberg, a frequent 6-train commuter, was responding to a question about whether crime would increase if the MTA cuts 450 token booth clerks as planned.

He estimated there are five crimes a day on subways - "given that we have five million people that take the subway a day, that is essentially zero."

How about your staff? Has the mayor never been on the train when it has been delayed "due to police activity"? Have you even looked at the most recent stats?
Posted by Queens Crapper at 1:46 AM

I know you hate the Mayor, but he is right on this one. For all intents and purposes, there is no crime on the subway.

Take the "groping" scourge earlier this year. The report said there were four hundred and some odd reported subway gropes last year -- even if the reported number is only 10 percent of the total, that is still only 4000 out of 1.45 billion + rides. You're more likely to die in a plane crash than get groped on the NYC subway.

Seems to me theres news of attacks and aggressive harassment on the trains quite often every couple of weeks or more. One in Ridgewood yesterday I believe.

You do know first commenter that bloomberg rides the train as a PR stunt with heavy security, otherwise hes using tax payer paid for cars that he has idle has he jets around making deals for new buildings we dont need.

What about the $30 million per year loss due to turnstile jumping?

Mark my words, he is planning on phasing out the Transit Bureau of the police department, and placing the personnel and their duties with the local precincts.

He's cutting the police force due to budget cuts. Watch him phase out the transit police and put those cops on the streets where he layed others off. God, how I would love for him to be mugged or groped on the subway. Trouble is, his security guards that constantly surround him are in the way.

what about the 19 million subway hoppers each year?

The only "crime" I hear about in our subways are riders who take up seats with their belongings on empty trains...

...And the occasional fare beaters.

By the way, it feels good being groped on a crowded train. We all fancy a feel sometimes!

(LOL) How's hizzoner going to get mugged...getting in and out of the limo he takes to his subway stop?

Not with his Uzzi toting bodyguards accompanying him on the #6 train.

Anyway I was at city hall one day and saw Bloomturd emerging like an emperor from his black Lincoln Town Car.

Who the fuck are you kidding about taking public transportation Mayor Muck?

What a phoney smile!

I am a tall, big guy who usually has no problems with people. However, I was traveling south on the Q76 once and did something admittedly dumb - I took my bills out of my pocket and counted them to see how much I had (which was probably $65 or so). A few minutes later two Hispanic kids rang for a stop in Cunningham Park. When the bus stopped, the younger one held the doors open and the one who was around 16 told me to give him my money and he began hitting me, and trying to put his hand in my pocket. Taken by surprise one arm was sort of pinned, and the other arm had my hand in the pocket he was trying to get his hand into. I began to get mad about being hit but whenever I took my free hand out of the pocket he was trying to get his hand into, he would try to get his hand in there to grab my wallet so I had to put my hand back in the pocket. I only had two choices, hit him or keep my wallet. After minutes of this went by, he finally gave up and left. About ten minutes went by, and the bus driver said, "were those your friends?" Yaa, my friends are two Hispanic kids, one who makes an escape route, the other who throw punches at me while yelling "Give me your wallet". As they didn't get the wallet, and the bus driver did not seem to care, and since it was rare for me to take the Q76 down to Jamaica and I figured the natives were always doing things like this, I never reported it.

So I have been assaulted once in an attempted robbery on an MTA bus. As the bus driver could have cared less etc., it was never reported. I don't know why 10% reporting is considered lowball by anonymous. I've seen things reported to police and it has been pointless.

So I have been assaulted once in an attempted robbery on an MTA bus. As the bus driver could have cared less etc., it was never reported.

Did it ever dawn on you to report it yourself??????? Did you get the driver's name? Did you get the bus number, time, etc.? I believe that counting your money in public is not the only dumb thing you did that day!!!

Every time I see crime on the subway and there is a police officer around, they usually just stand around and just watch or ignore. I remember a women being assaulted and I intervened and the guy stopped. Cop was only a couple of feet away and could care less. Another time a guy was jerking off in the subway behind an unsuspecting woman. I yelled at him and he stopped. Again, a cop was close by and did nothing. What's worse is that rest of the riders could care less either. In fact, some looked annoyed that I interrupted there mindless morning daze. This obviously speaks to the flurry of unreported cases. I remember trying to report on something once and the cops seemed to try really really hard so I wouldn’t. I've only showed up to a precinct twice in my life to report anything and they've made me feel like the criminal. SUCKS!!!

To the previous "Anonymous":

you are so right - the cops act like they're doing you a favor and then they don't do it.

they just want a paycheck and a pension

People are getting edging and quick to lash out verbally on Subways. It is currently a powder keg!

I think homeless bums taking up three seats, soiling them with their urine is a crime on the subway.

He's banking on the fact that if you repeat a lie enough times eventually people will believe it's true. They do it to us all the time and unfortunately like good little sheep-people we fall for it time after time.