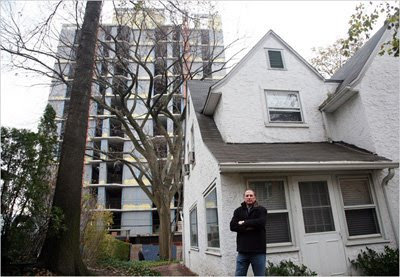 Neighbors near the unfinished Tulfan Terrace development had their own particular problems, with rotting building materials falling onto the street, landing on and causing damage to cars and homes.

“All over Oxford Avenue it was covered with sheetrock that had blown off of Tulfan Terrace,” said James Weeks, 57, who lives nearby.

“There was debris everywhere, it damaged cars … and the fence blew over again,” Mr. Weeks said.

He said that although neighbors had called the Fire and Police departments about the dangerous property — where construction of a 30-unit condominium was abandoned years ago — no one cleared any of the debris or repaired the security fence around it.

“They came and took reports and put up some yellow caution tape and left,” he said. “We’re wondering, is someone is going to need be killed before the city will do anything about this?”

The answer is yes.

Hey, where's Mr. Public Safety (and our King of Queens Crap), Peter Vallone, on this?

Photo from NY Times
Posted by Queens Crapper at 1:01 AM

What a stupid place to put a building!