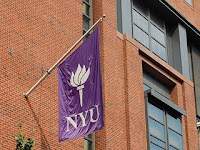 NEW YORK (AP) -- New York University is proposing a massive expansion over the next 20 years.

The proposal calls for a new tower on Bleecker Street and 3 million square feet of new offices, dormitories and classrooms in the Greenwich Village area. It also includes a new engineering school in Brooklyn and a satellite campus on Governors Island.

The projects, which would expand NYU's physical plant by 40 percent, still need approval from city agencies.

They've already been met with concern from some neighbors and preservationists worried about overwhelming the historic area.

NYU says it needs to expand to accommodate a growing student body and compete with other universities.

The plan will be formally introduced at a series of events in April.
Posted by Queens Crapper at 1:48 AM

i hate that institution

If you thinking of enrolling at NYU to expand your mind (LOL)...the university's main concern is to use a large portion of your tuition money to expand their portfolio of real estate holdings.

And do you get even a tiny percentage of the profits from their venture since you've invested in it?

But you've got to repay your student loan along with the percentage on interest required by the lender.

Columbia University is a cancer too!

The plan? Is this the plan that Columbia University is executing, namely using eminent domain to bulldoze everything in sight that it wants to build on?

If NYU carefully integrates within the zone on properties that are available for sale and stays within character of it's existing neighboring structures and without disrupting the existing residents - then the city should tread carefully approving what works and rejecting plans other wise without using EM. The Governors Island proposal should not be a public give-a-way NYU is a rich school who must pay up market rates to lease public property - we certainly can use money in the public coffers. Maybe NYU should be made to build in Willets Point instead of all the malls and housing already proposed. The students could apprentice in the existing business adjacent to Citifield who provide PT jobs. The City could fix the infrastructure and provide Police and Fire services that are lacking here.

Just wait till all the hospitals expand into university's to meet Obamacare's 30 million more people, 70+ million when he gives the illegals amnesty and health coverage.
Can anyone guess where these new cut-rate doctors and medical students are going to come from and live ?

I see a huge abuse of eminent domain and new housing laws on the horizon. Only this time it may be backed and enforced by the federal government at gunpoint to provide all this health care.
Have a unused basement or "wasted space" ? You may have to take in a doctor's extended family from Bangladesh or Russia at government ordered gunpoint!

Don't laugh this WILL and I repeat "WILL' eventually happen with these scumbag socialists in the White House, Senate and Supreme court

The city may as well just go ahead and rename everything between 14th street and houston, university west, university central, university east, etc......

the people who work at NYU are scum. I went for an administrative assistant job many years ago and the foreign interviewer started in on me, arguing about "what I was doing there." It wasn't an interview at all.

They clearly profiled you.
Unless you have sombody really big pulling strings you cant get any position at these university's, public schools, TV show's unless your a liberal, Democrat or gay
(Big plus of your all 3)
God help you if you walk in with an American flag pin.
Its a fact

Why did you even wast your time or let them "scope" you out.

What's the point of university expansion, when there are no jobs awaiting the students who graduate?

Anonymous: the people who work at NYU are scum.

This longtime employee of NYU, who has deeply mixed feelings about the University's proposed takeover of the entire city, bids you a hearty FUCK YOU. I wouldn't want an administrative assistant, either, who didn't know how to capitalize English sentences.

This longtime employee of NYU, who has deeply mixed feelings about the University's proposed takeover of the entire city, bids you a hearty FUCK YOU. I wouldn't want an administrative assistant, either, who didn't know how to capitalize English sentences.
--

This graduate of NYU thinks the place said that to me the entire time I was there.

Anonymous:This graduate of NYU thinks the place said that to me the entire time I was there.

This graduate with honors doesn't entirely disagree, but at least he learned there enough not to show his gaping asshole in public forums. And to capitalize properly. Such are the wonders of a higher education.

"he learned there enough"

This CUNY graduate knows well enough that what the NYU graduate wrote is not proper English. Money can't buy smarts.

Queens Crapper: "he learned there enough"

This CUNY graduate knows well enough that what the NYU graduate wrote is not proper English.

The NYU graduate begs to differ and considers it, in fact, a rather elegant English sentence, if he does say so himself. What part of it does the CUNY graduate not understand? The NYU graduate referred to himself throughout in the third person for stylistic reasons occasioned by his initial post. This is an ancient and entirely legitimate rhetorical strategy. As for the clause that the CUNY graduate seems in particular to question the NYU graduate freely admits that the more standard wording would have been, "he learned enough there...." He chose, however, to change said wording, as was his right, in such a way that, while still comporting with the rules of English grammar (although Sir Philip Sidney assures us that it wants not grammar) he subtly emphasized the word "THERE," i.e., NYU, his alma mater, where he learned whatever it is he learned. The NYU graduate suggests that the CUNY graduate read a better class of literature where such unusual but correct constructions might be encountered on a more frequent basis, making them less unfamiliar to her.

Wouldn't know. Never have had much money. I acquired my smarts the old fashioned way - through wide reading and Star Trek reruns.

You never had much money but you went to NYU? Okay...

And I like how you coupled "there enough" with "gaping asshole".

I guess you learned that at NYU as well.

And for the record, I'm a guy, in case you missed the NY1 clip which I have posted numerous times.