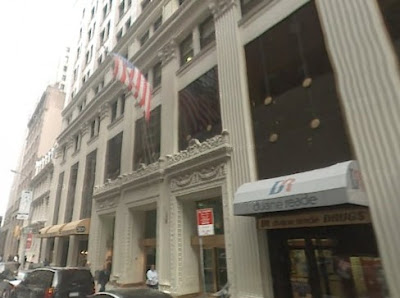 NEW YORK (AP/1010 WINS) -- A fire official says a listing crane has struck the side of a 25-story building in lower Manhattan.

The fire official said Saturday there were no injuries after the crane hit the 23-story parapet of the building near 80 Maiden Lane. A parapet is a barrier that extrudes from the side of the building and can be decorative.

The official says it's unclear whether the building was damaged.

He says at least 6 trucks responded to the area and that some traffic is being diverted and streets have been closed.

As the Village Voice points out, this is the HQ of the NYC Department of Investigation!
Posted by Queens Crapper at 8:51 PM

We just don't have enough construction projects in NYC. Right, Mike? Who cares about people anyhow? Other people's property? It'll be mine soon enough!

How could this have happened? I thought the Commissioner got rid of all the "bad apples" among the crane inspectors?

I thought the Commissioner got rid of all the "bad apples" among the crane inspectors?

build, build, build ... don't mind if we break a few eggs for them omelets.

Wait till they publish the ## of violations the developer was working beyond when they investigate this....
Bloomberg still doesn't get it, as he acted to create a new salaried position in Bldg. Dept.
called loosely " guy who approves cranes to go up in presence of other violations we hope won't mess the crane up"