More work on the 7 line; N getting cut 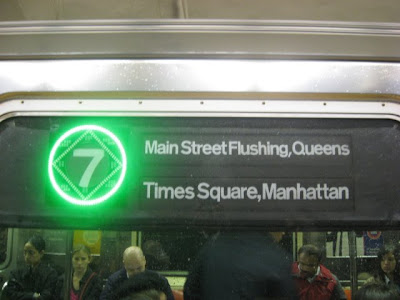 Queens straphangers can expect more headaches in a few weeks, when a new project begins on the elevated tracks of the 7 train.

The 21-month project to scrape and repaint the structure from 40th St. to the entrance of the East River tunnel on 21st St. will cause some delays, including single-track service on a couple of weekends, officials said.

But after weekend service was shut down for most of February, some elected officials are just thankful locals won't be stranded.

"In this case, we have at least some advanced notice," said City Councilman Jimmy Van Bramer (D-Sunnyside). "We understand that work needs to be done."

We have advanced notice every year when the work is done. I don't understand this statement. Do you want an engraved letter?

Buried in the 127-page MTA document detailing transit service cuts is this doozy: the end of N express service in Manhattan.

As part of plans to kill the W line, the MTA will run the N local from Canal Street to 42nd Street. That leaves just the Q for express service, tacking on at least two minutes to the commutes of 77,000 straphangers, according to agency figures.
Posted by Queens Crapper at 12:18 AM

Bigger problem than adding 2 mins to the N is that it's going to be packed to the balls. Also, that 2 mins only accounts for the extra stops, not for the extra time it will take to board these trains at each stop as a result of it being packed tight.

Never mind express service, the 34th Street station on the N/R platform is way hotter and smellier than taint during the summertime.

But isn't the Q (which will run to Astoria in place of the W) going to run as an express?

Hey Jimmy, when are you going to tell the Tower Kids that Flushing will soon double its population and idling trains from a train yard will be the least of their problems?

Remember this folks - you are the ones that voted for another million people.

Hoped watching American Idol was worth it!!

Well, we're all out of work anyway. We may as well stay home and save our money.