Still no crime in the subway 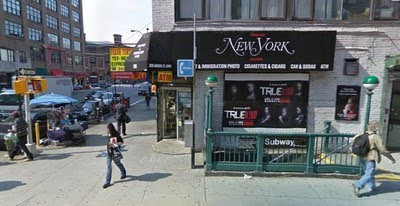 Two men were killed and another injured after an early morning confrontation on a subway train.

Police responding to a call shortly after 5 a.m. Sunday found the three men when the train was stopped at the station at Varick and Houston streets.

Police said the stabbings occurred during a confrontation between two groups. Authorities were searching for those involved.

Is that all? Here I thought they were going to insinuate that a crime took place in the subway, which we know, thanks to Mayor Bloomberg, is impossible...
Posted by Queens Crapper at 10:38 AM

Bloomberg lies about everything. He is garbage. Did you see him playing an old hippie in some production of Hair? Must have forced the casting director to cast him or he/she would be taxed or forced to ride the subway.

Alarming that it was a group/gang/mob attack. this is the new trend.

I am afraid we will find out that it was teenagers, no one older than 20 years old.

Bloomberg's big mouth is undermining his own NYPD subway random bag search program as well. This has been a week full of mouth-in-foot moments for our Mayor-For-Life.

I hope the responding cops and EMS all found legal parking spots.

When they're ON DUTY it's not a problem.

"Still no crime in the subway"

And the check is in the mail...

Crime? They were just hipsters re-enacting the bathroom scene from "The Warriors". There's no "crime' in the subway!!!

When they're ON DUTY it's not a problem.
------------------------------
Why not? They are still taking valuable parking spots from regular citizens, or they are parking in fire hydrants and bus stops, when anyone else would be ticketed for parking there.

Because they are responding to a crime scene, which they aren't doing when they are parked overnight EVERY NIGHT at the hydrant in front of my house.

No, silly. They were re-enacting the "Rumble" from "West Side Story". Get it right!