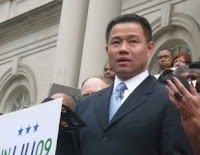 The purpose of the effort, which saw its first meeting Friday, is to recommend a more formalized process of creating "community benefits agreements," in which developers seeking public approvals strike deals with a collection of community groups and labor.

Okaaayy...so if they want helpful suggestions on this process, why wouldn't they put representatives of actual community or civic groups on the board? Otherwise, it's just a bunch of people with real estate interests and not community interests, which I suppose is intentional.

At least you know what to expect from Johnny. He never disappoints or surprises.
Posted by Queens Crapper at 12:19 AM

We must patiently, tirelessly explain to you that the machine is in control because, unlike you 'do gooders' always being 'fair and just,' or simply distracted by the course of life, or worse, assuming that public servants are there to, well, serve the public, nothing is left to chance.

Everytime you are given the mike to speak, be assured that you are scripted, or that they consider you a safe window dressing for .....

PS That is why we have this blog. If they ignore you, you have a place here to communicate with your fellow citizens. Note the quote by John Adams at the sidebar every morning.

Well, I wouldn't buy a used car from that guy. Oops. I was politically incorrect. I meant a "previously owned" car.