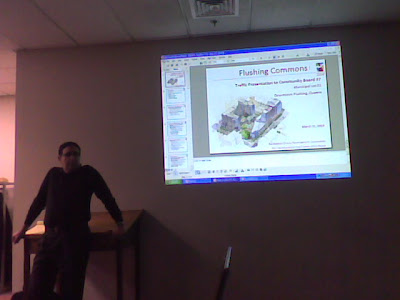 The third of CB7’s committee meetings on TDC/Rockefeller Group’s Flushing Commons/Municipal Lot 1 project was held on Thursday, March 11th. The main subject was traffic impact, with parking being the continuing sidebar.

DOT and TDC presented a VERY long evening of technobabble, which boiled down to this: there WILL be much more traffic congestion and increased parking problems during construction... and afterwards, forever. 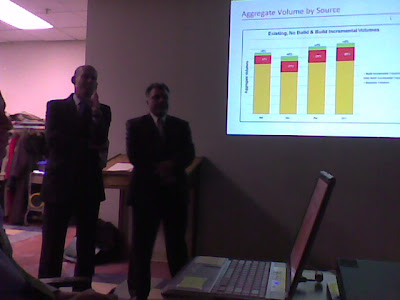 CB7 did a masterful job questioning both the developer and city officials.

When the smoke (screen) cleared, it looked to this reporter and many others that Flushing Commons will impose a very great strain on Flushing’s already over-stressed infrastructure. 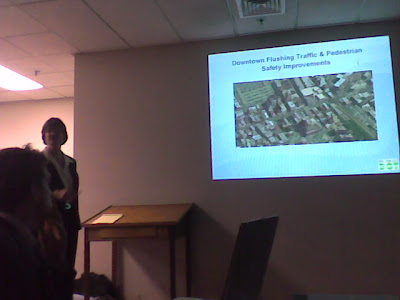 The magic word “mitigate” was applied by DOT to its proposals:

1 - Bump out some sidewalks, narrowing roads.
2 - Driving in downtown Flushing, going north on Union Street? Surprise -- NO LEFT TURNS ONTO NORTHERN BOULEVARD!
3 - And NO LEFT TURNS FROM NORTHERN TO MAIN STREET!!
4 - NO TURNS AT ALL FROM MAIN STREET ONTO ROOSEVELT AVENUE, in any direction, period.

Some buses will be rerouted onto Prince Street in a great circle loop. In other words-- a roadblock smack in the middle of the town. 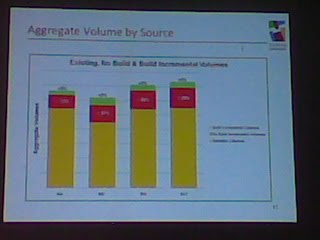 Now look at the pretty colored bar graph. Forget about details for now. Yellow is the existing high level of traffic. On top of that is red, representing the increased percentage of traffic woes from the fifty -- that's right, fifty -- projects, planned or under construction, that will exist by 2013. Then on top of that is green, showing the additional impact of just Flushing Commons -- up to 25% more, by itself. TDC s techie admitted they couldn’t find much possibility for mitigation.

Final conclusion? You guessed it right: a traffic nightmare in 3 years. Hey, but look on the bright side: TDC/Rock is installing bike racks!

Thank you again, Mayor Bloomberg and your EDC, for selling off a public facility to further enrich a wealthy group of private developers at our expense.
Posted by Queens Crapper at 12:00 AM

Flushing Commons (should I say Flushing Privates, since it's no longer a publicly-owned lot)

Flushing Commons can be stopped. It must be stopped!

Where does our illustrious councilman Peter Koo stand on this affront to the citizens of Flushing? Is he ready to stage a coup to protect the community he was elected to serve...or will he be another politician willing to sell out the community in order to fill his pockets or promote his career? Stay tuned for the next episode of Flushing's Final Days!!!

The first reply is right on. This is a commons right now as it is publicly owned. Bloomturd wants to hand it over to "Rockefeller Development" (a subsidiary of Mitsubishi Estate) and make it private.

Right now I can drive to the lot, run an errand for fifteen minutes and only pay a quarter. Or run an errand for half an hour and pay fifty cents. How long are those rates going to last when Mike's real estate buddies get a hold of it? A fifteen minute errand will cost you $5 minimum within a few years. Curb parking anywhere near Roosevelt and Main will be non-existent (it already is now).

The reason they want to get rid of it is it works so well. It is government run but it pays for itself - it makes thousands of dollars a day and how much can maintenance cost? It is putting money in the city's treasury, and this inflow will stop when it is given away. It is also a convenience to the average Flushing resident.

"Thank you again, Mayor Bloomberg and your EDC, for selling off a public facility to further enrich a wealthy group of private developers at our expense."

Yep. All of this is the fallout of that old fraud Reagan and those that followed him.

Look at the debacle of the WTC site. It took two stupid doctrinaire republicans to sell of that site just as it was becoming profitable. Now we Shylock Silverstein and his 99 year claim holding up rebuilding.

Last time I checked, Bloomberg was a liberal democrat, as is Bruce Ratner

AHHA! Now this might be one of the main reasons Bloomberg wanted a 3rd term.. to finish up his suggested projects and ensure it's either in completion or in progress so that other newly elected will not canceled his 'hard work' to get these things going. (also similar to how the testing/temporargy pedestrian hangout at Time Square/Broadway is now made permanent )

One of the phrases that's being dropped to describe the Flushing Commons debacle by TDC/Rockefeller Group and their friends is that it's "transit friendly".

We're supposed to use our antique transit system instead.

Hasn't that been his position for over 20 years...to discourage parking and traffic problems by eliminating automobile traffic?

In other words if you provide parking they (the cars) will come...so don't provide enough of it!

So just who is this project being built for?

Not the community but a politically well connected overseas lobby group that has fed funds into local political campaigns.

Hello Congressman Ackerman...are your blog watchers getting all this?

And you C.M. Koo...do you approve of this mess?

Show your face or are you too embarrassed to do so? Because we've heard that you support Flushing Commons as is!

Fess up...this is being built as a mono-cultural "upscale" colony (for guess who?)

Come clean and admit it!

It's not for the rest of us residents.

I haven't shopped in Flushing for a decade now because IT'S TOO DAMN CROWDED!

I either drive out to the east or take the LIRR into Manhattan.

What has Flushing got to offer?

This will never become a destination of choice.

It's at the end of a very long subway ride offering tourists a microscopic fragment of what the "golden isle" of Manhattan has to offer.

It's being planned solely as an international business center because it's close to the airports.

Yes its all true. Mayor Moneybags 3rd term was all about tying up loose business ends. That project in Flushing benefits the developers.

Moneybags wants to leave a legacy of tall buildings, luxury condos, unwanted sport stadiums, and other bullshit big projects. It's all being passed off as "progress."

Unfortunately, that project in Flushing will bring about more chaos.

The people and our communities no longer matter to elected officials. They are cheerleaders for the mayor.

many of the developers are liberal/democrats.

some even financed the dead/left wing radio station "AIR AMERICA". the name rhymes with wurst.....