A developer with a conscience? 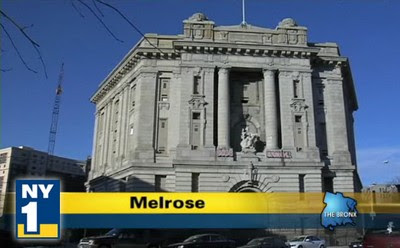 For developer Henry Weinstein, the old Bronx courthouse on 161 Street and Third Avenue, was love at first sight.

“Just look at it! It's a wonderful building,” exclaimed developer Henry Weinstein.

The lofty temple of justice served the borough until it was abandoned in the late 1970s and left for ruin. Inside, remnants like cracked marble stairs and broken stained glass offer a window into the courthouse's glory days.

The long-time neighborhood advocacy group, Nos Quedamos, instrumental in the renaissance of the Melrose section of the South Bronx, fought to acquire the now-landmarked property, but the Giuliani administration put it up for sale.

“We've spent probably more than a million dollars doing demolition, plans, and putting in gas, electric, water, and all the necessary utilities,” he said.

A wide range of tenants, from fitness clubs to banks to food vendors, has expressed interest in the more than 80,000 square foot property, spread out across six levels. Weinstein says there have been many false starts; most recently, plans for a charter school fell through. So the wait for the right anchor tenant continues.

“We could have turned it into self-storage 10 years ago when we first purchased the building, but we didn't feel that it was an appropriate use for such a beautiful structure,” Weinstein said.

In Queens, our stately courthouses get the condo treatment: 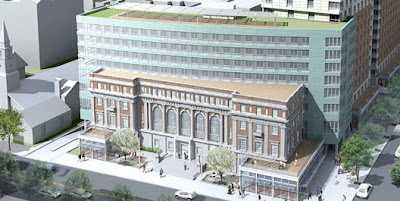 Posted by Queens Crapper at 1:36 AM

I hope the building is put to good use. Perhaps a school or some institution that benefits the residents in the community. Not turned into a luxury condo to make the area "trendy" and "hip."

Good for him. An architectural gem like that needs to survive.

God Bless Henry Weinstein. Finally, an architect with an eye for beauty and grace. Kudos to him for preserving this beautiful structure. He puts all these money grubbing architects and developers to shame. They should all learn a lesson from him.

As for those architects who continue to build "glass monstrosities", BEWARE!!

CAMP is watching YOU!!!!

Calling all Crapper aestheticians. Why the animus over the Jamaica court house? Please explain to me. It sort of reminds me of the I.M.Pei pyramid in front of the Louvre in Paris.

Can I get a witness?

Why do classic buildings need to have glass crap slapped on top of them? It never looks appealing.

As Mr. Weinstein is proving, it doesn't have to be that way.

Weinstein is a hero for other reasons as well.

It sort of reminds me of the I.M.Pei pyramid in front of the Louvre in Paris.

I'd much rather have I.P. Freely design my buildings than I.M. Pei!

Why do classic buildings need to have glass crap slapped on top of them? It never looks appealing.

A person with taste! Vitruvius is looking down appreciatively upon you from Mount Olympus right now!

Can I get a witness?

No! Zeus is preparing a spot in Tartarus for you and everyone else with bad taste in architecture right now!

From the late NYTimes architectural critic Herbert Muschamp's iconic ravishing review* of the Trump World Plaza, June 2, 2002 [the black monolith by the UN and easily visible to all western Queensites]:

"...it is pleasing to see a flat roof raised to the top of the skyline by four glass walls."

"...technology has greatly expanded the expressive potential of glass"

"Why do classic buildings need to have glass crap slapped on top of them? It never looks appealing."

It's called Wall Street Greed. The kind that made the world economy collapse.

Henry weinsteins wife karima is a heroin addict and he provides with the drugs. He married her here as a minor he was 50 and ruined her life n has her locked in her house...that man needs to be stopped!!!