Too long of a wait for help 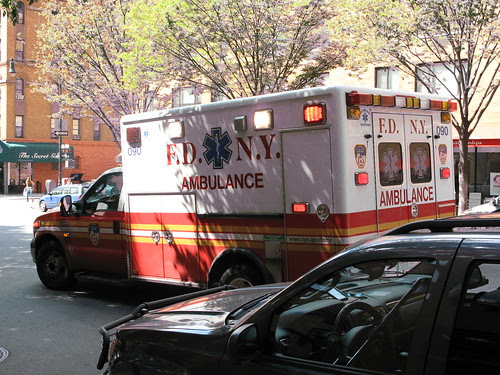 Where is an ambulance when you need one? Twenty-five minutes away, that's where.

Last week, my child had a seizure. I called 911 for an ambulance, which took 25 minutes to arrive.

Thank God the first-due fire engine company was here within four minutes. They started my child on oxygen and monitored his vitals until the ambulance arrived 21 minutes later.

I am so glad the company wasn't closed due to the budget cuts, which is part of the reason why it took so long for an ambulance to come.

If the ambulances previously run by Catholic Medical Centers were out on the streets, my wait time wouldn't have been that long. Due to the closure of St. John's and Mary Immaculate hospitals, we are short 11 ambulances.

Why was there this delay?

Both ambulances arrived at the same time. The medics who arrived at my home told me that they had come from Erskine Street and the Belt Parkway near Spring Creek in Brooklyn. I live in Ridgewood.

Where were all of our Queens ambulances?

When it comes to needing an ambulance, every second counts. The longer the wait, the more critical a patient can become.

When will our city and state realize that cutting services from our civil servants isn't the answer? Maybe when, God forbid, it is them or their families that needs the help, they will see the error of their ways.

Karen Schneider
Ridgewood
Posted by Queens Crapper at 12:41 AM

You may want to make donation to your local volunteer ambulance corp.

An excellent suggestion - however they are limited as to what Hospitals are left to take you to - maybe a hospital in Westchester or Fairfield County Conn?

Karen already makes a substantial donation to the city, whose existence is solely for the purpose of protecting citizens. She makes this donation under coercion and makes it every day, all year, every year. And this is what she gets?

I suggest that Karen send her letter to Commissar Death and taxes, who has open loathing for children.

And then use her power to fire the Commissar on November 3. Why have the power if you don't use it to control your life and your family's health?

Blame it on "bloody" Bloomberg!

It was under his watch that several Queens hospitals closed!

What other cuts in vital services have been planned for what he and City Planning have deemed to be the red-lined neighborhoods throughout NYC?

In the meantime northeast Queens just had all their curb trees trimmed by the Parks Department's forestry division.

There was money enough for that frivolous gesture in an election year!

Bloody Mike serves the "better" areas while he cuts services in the "not so good" areas...typical of his contempt for the "lower classes"!

OFF WITH HIS HEAD AT THE POLLS THIS NOVEMBER!

It's time for a tax revolt!

How about a public revolt?

You morons in Queens are always so POLITE to these second rate hacks as they keep treating you like the DOORMATS that you seem you are.

So until YOU change NOTHING will change.

Yeah will we act up on election day! Just hope the dumb ass mayor didn't buy the GAY VOTES! change has to start inside and out. and i'm no doormat but can't say the same for the lying back stabbing council a-holes.

Silly isn't it? I guess the Mayor would never wait 25 minutes, but we can!! Oh, and not all volunteer corps have people for day and night. Some only are in at night.

My father collapsed on February 14th. The ambulance took 15 minutes to arrive at the scene. My father was pronounced dead at the hospital. I can't help but think he might be alive today had the ambulance arrived sooner.