Much to say about Sean Bell Way 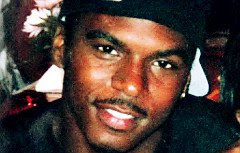 CB12 recently passed a resolution calling for the renaming of a Jamaica street after Sean Bell, which of course is about to open a big can of worms.

City Council Speaker Christine Quinn is backing the controversial bid to re-name a city street after Sean Bell, the Queens man who was fatally shot by cops hours before he was to get married.

A member of Quinn's staff called the head of the city's Detectives union last Friday to say she would back the push to for "Sean Bell Way" to mark the Queens block where police killed Bell on Nov. 25, 2006 sources said.

But, as the Daily News also reports, not all council members are falling in line:

Vallone noted the new standards for street renaming adopted in August 2008 following the Sonny Carson fight requires subjects up for the honor meet the following criteria:

- City residents or natives or individuals of particular importance to New York City;

- Whose importance to the City or whose enduring interest is a result of exemplary acts or achievements which reflect positively on the City.

So Quinn is violating the council's own rules by supporting this. In fact, it should be disqualified automatically, based on these rules, but it won't be, because the Christine Quinn is a big coward.

In the meantime, there's a police cemetery in Brooklyn that's falling apart.
Posted by Queens Crapper at 12:42 AM

This is wrong.
Shame on Quinn for backing this.

Can't wait til voting time. Some council members and the speaker HAVE TO GO!

There is nothing heroic about Sean Bell. It was a tragic incident.

I don't want a street named after him. As a taxpayer do I have a say?

Community Board 12 voted to go ahead with the naming BUT the interesting thing is that the Chairwoman, Adjoa Gzifa, voted "no".

Gzifa is a real interesting character. Dresses in African garb and has visited Ghana annually.

I.e., a real bona fide Afro-centric voting against the wishes of the Bell family and the community.

IF THEY PUT THAT STREET SIGN UP I GUARANTEE IT WILL BE VANDALIZED OR REMOVED ILLEGALLY..

He did not save lives or fight injustice or do much of anything except decide to make an honest woman of his fiance. Perhaps in these days of lax standards that counts as heroism of a sort.

Getting back to the police cemetery, the motto of the old Metropolitan police was, "Faithful unto death." They were the ones who protected New York City during the terrible draft riots and saved countless lives. What happened to their cemetery is a disgrace.

God bless Sean Bell and peace to all his family and friends. It was a very tragic incident. I personally think this ass kissing "QUINN" is only doing this is for her ass aka " THE BLOOMING IDIOT OF A MAYOR". He could sure use the black vote. Why did'nt she do this last year? or the year before? Election year must be the best time to do it. Remember that in November...........

Wow it's not right to name a street after him. Yes I feel sorry for the family, but he wasn't someone that was a hero or did great accomplishiments for his community. And yes I have to agree with other blog, our mayor and Quinn are just using this as a way to try to win black votes, which is very sad because the blacks hate him just as much.

You shouldn't name a street after someone who was, at the very least, acting recklessly.

But if you oppose Sean Bell Way, You Are A Racist.

Any level of positive support to rename a street after a thug will just demonstrate how lowlife those council members really are.

To name a street after a no-accomplishment thug cop hater will prove that the council members who vote to rename (or even abstain) are also cop hating, no accomplishment thugs themselves. But, this is not news.

A vote to rename will also reveal what the council thinks of tax paying, law abiding citizens.

Then there's weak sister James Oddo: "Council Minority Leader Jimmy Oddo said he shares Vallone's concern about whether it's appropriate to rename a street in Bell's honor. However, Oddo said, he is not anxious to see a repeat of the racial division caused by the Sonny Carson renaming.

"I'm not inclined to vote 'yes,'" Oddo said. "But the last thing I want for the City Council is another summer of Sonny Carson. I lived through that. It was divisive. It distracted us and it became like a soap opera. It was a really bad time for the Council."

"..If the community wants to rename it, that's their choice, but I won't support it. That said, I'll do everything I can not to allow up to go down that road again," Oddo concluded."

But, Oddo hasn't the brains to figure that out by himself.

My bet? Oddo will vote YES. His spin will be that he does not want "to go down that road again". He'll be saying that when he can get his head out of Quinn's ass. He thinks that's where her slush fund money is kept.

Memo to Oddo: That isn't money up there. And, it aint slush, either.

Not too shocked here. A street in Philly was actually named after a CONVICTED COP KILLER!

I guess this is the type of person that the residents of Jamaica aspire to be like. A gun-running thug. If he wasn't dead, he'd probably be rotting in jail anyway. Typical pillar of society.

But this is tweeding so what is the problem?

I mean, come on guys, if NYC can become one big whore to elect Bloomturd and no one sees the problem, what is the issue here?

Are you idiots kidding me? God Bless Sean Bell? If you're against the street naming your a racist? How fucking stupid can you people be? You make a big shit about hooters of all things but your fine with a street being named after a convicted felon who tried to hit a police officer with his car while under the influence. God you people piss me off. I hope he sold drugs to someone in your family!

Actually, it seems the anonymous above me doesn't understand facetiousness or anticipating what the opposition's talking points will be.

Get a clue, asshole.

Whaddya expect, this bloke patronizes Hooters. LOL. Not the brightest bulb on the planet.

This should be an honor. People who do good in and for the community. Not for this. Sorry, NOT a racist, just not should be for anyone, should be a good reason to have this honor. Many people have died before their time. Just about all the streets in New York would have one of those signs!

And people wonder why cops are slow to respond? Say goodbye to pro-actve policing. It looks like we will be returning to the days when the police responded after the fact and took a report.

Get used to it.The cops have become report takers,not crime fighters.Might as well rename a street for larry davis.Good luck citizens,you'll need it.

What is Quinn thinking here?
This is a powder keg of an issue, to even consider this is to be looney. Well maybe not as Quinn is setting her sights on the Mayoral office down the road and collecting cheap support.
Yup the the lesbian supports Adult men's clubs that operate with code violations and run a dirty, druggy buisness that attract the likes of the parties that included Sean Bell and idiots who brought him to the club where he was killed at. The communities fight these clubs from opening and Bloomberg does nothing to help them.

Quinn is thinking that the Black, Latino and Asian caucus (25 members) would vote for her for speaker again if she supports this.

WHAT! no one likes her and is tired of that dyke telling them how to think and talk. I just hope they have the balls to vote NO!!!!!!!!!!! she is has to go along with her ass wipe mayor.

Quinn has balls and it is time to cut her balls off.

The future may be looking brighter for the Police Arlington, a long-forgotten burial site for New York City police officers at Cypress Hills Cemetery.

A number of active and retired police officers contacted the Daily News and the cemetery after last week's Civil Service column pointed out the sorry state of the once-grand memorial, located on the Brooklyn-Queens border.

They have promised to step up and raise money to restore the site, which is controlled by the NYPD Honor Legion, to its former glory.

"I'm very optimistic," said John Desmond, president of Cypress Hills Cemetery. "I've been getting a very favorable response. Everyone is interested and wants to see this done the right way."

The site was established more than 100 years ago for members of the Metropolitan Police Force of New York. These days, the Honor Legion decides who gets plots at the site.

Over the years, the grounds were ravaged by vandals. The massive bronze statue of a policeman was stolen in 1966. In later years, the bronze plaques that marked the site as a police burial ground also were stolen.

The walkways are broken, and the cemetery has taken over the task of replacing the flag.

Honor Legion officials told The News that care of the grounds is up to the cemetery. But other cops - including some members of the Honor Legion - have been disappointed with the group's response.

Members of other police fraternal organizations have expressed interest in fixing up the site. Desmond is hoping to gather all the interested parties and draft a plan for a renovation.

"It's really nice to hear all the support," said Mike Bosak, a retired NYPD sergeant and police historian. "I think they are all going to get together and rectify the wrongs that have been done. "I really hope they can get enough funds together for a complete restoration."

Don't name the street after Sean Bell but named a gargbage dump or landfill after the officers who MURDERED him.