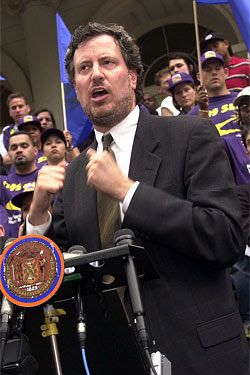 From the Daily News re: the cleanup of the Gowanus Canal:

De Blasio conceded the city's plan is a "short-term" solution, but said funding for a comprehensive cleanup could be cobbled together from other sources and that the waterway is safe to live near.

Federal officials have found high levels of cancer-causing PCBs and metals such as mercury and arsenic in the Gowanus Canal. While contaminants at many hazardous waste sites are measured in parts per million, levels of coal tar more than four parts per hundred were found in canal sediments.

This has caused some in Brooklyn to question deBlasio's motives.

Keep this in mind when you cast your ballot in the public advocate's race. It's not about people's health. It's about developer bank account health. Just ask a Gowanus Canal fisherman. One thing everyone can agree on is that this stinks.
Posted by Queens Crapper at 12:10 AM

Let's say it again SPECIAL INTEREST... another one to join the club of assholes. Hey jack ass would you live there? and what about the smell? I'm so done with all these idiots. so in ten to twenty years you'll have people with cancer or another illness and then will start to question it. Clean the crap up and don't build.

This site will become New York's LOVE CANAL. DeBlasio should go back to running for Brooklyn BP not PUBLIC ADVOCATE. He has no idea ( he's really clueless) of what the office is about. He should be advocating for the PUBLIC HEALTH & WELFARE not for the developer, although getting campaign contributions from them can sway you. My vote is for Norman Seigel, the "Real Public Advocate". Always has been , always will.