Teams find out that karma's a real bitch 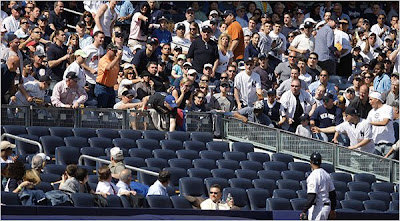 After spending $2.3 billion on new stadiums packed with suites, restaurants and the latest technology, the Mets and the Yankees expected fans to embrace their new homes and pay top dollar for the privilege. Almost every team that has built a new stadium in the recent past has seen an immediate surge in attendance.

Instead, the Mets and the Yankees face a public relations nightmare and possibly millions of dollars in lost revenue after failing to sell about 5,000 tickets — including some of the priciest seats — to each of their first few games after last week’s openers.

The empty seats are a fresh sign that the teams might have miscalculated how much fans and corporations were willing to spend, particularly during a deep recession. Whatever the reason, the teams are scrambling to comb over their $295- to $2,625-a-seat bald spots.

That's what happens when you take kids' parks away from them and replace them with garage top carpets and push for people's land to be stolen so your fans don't have to suffer the indignity of gazing down upon the working class.
Posted by Queens Crapper at 12:00 AM

But wait there more!!!

With declining spot rates for OTA and cable broadcast -and- the empty seats, those teams will surely be back at the City trough looking for:

3) Outright handouts..but let's be creative here. The City should buy some of those wonderful unsold premium tickets (full price ofcourse) and make them available to disadvantaged people. How about a "Homeless Day" promo? Bring a bag of empty cans get a premium seat.

..And don't you dare suggest reducing the pay given to those precious ball-whackers.

I was on the Van Wyck today driving from the Whitestone Expressway. That is one butt ugly stadium. All you can see are large advertising signs. Between the food court mentality and the presence of these huge advertising billboards, it seems like baseball was a second thought and not the main focus. The huge corporate suites add to the negative ambience. Am I missing something?

CITI FEILD LOOKS LIKE A GIANT A.T.M. and the reason those seats are empty, is cause they are way too expensive to the average joe. Maybe "bloomberg" can buy them and take us out to the ball game?

The Mets had better pay up for all the services it requires to put on a game. Police, Fireman and Sanitation Depts are all involved managing the surrounding area when agame take place. Let the Mets pay for it - they earn revenue - let the City tax them to allow the games.

Fine the Yankees for each day the park swap for the staduim placement is not built. The Yankees should have taken their show to NJ and disapear forever. Tax the daylight out of them, insure every cent is paid back to the City.

There was nothing wrong with Shea Stadium that renovation would not have fixed. Rich spoiled owners and there new toys that we pay for. Citi Field Looks like a Mall with a baseball field in the middle of it.

I have now been to both new stadiums. Yankee Stadium to me was not that special. The outfield bleacher seats are still bleaches. Citit has an actual seat for everyone. Citi feels more quaint. The Yanks might have the most ridiculous center field screen I have ever seen. There were SO many empty seats at Yankee Stadium though. At that was all over the ballpark.

I hope the Yank's owners can't meet their Con Ed bills and the utility cuts the power off!

No more night games and melting ice cream in the concessions freezers!

I thought those expensive pie-in-the-sky boxes were supposed to cover the cost of it all.

The consumers have spoken!

Shove 'em up his ass and not in the taxpayers' faces!

We hear that our pols have already requested federal bailout money from the Obama administration.

Bloomturd can't wait for 4 more years. He really played the people the last time around. Listen carefully to what he said prior to his last re-election about stadium deals:

Bad karma? The Yankees sold 45,000 seats on a Wednesday afternoon in April. You don't think they are making more money with this Stadium?
Shea was a disaster. The teams funded hundreds of millions of dollars of their own money for these stadiums.
This blog is getting hilarious.

The teams funded hundreds of millions of dollars of their own money for these stadiums.And they're losing hundreds of thousands of dollars at each game because they didn't understand the market they were building in and who would be buying.

The teams funded hundreds of millions of dollars of their own money for these stadiums.
And taxpayers didn't contribute to infrastructure improvements and in other ways? Puhleeze! This blog makes a valuable contribution to our knowledge base of important local issues that are difficult to find elsewhere. Seems like the joke's on you!

Replace the Mets and the Yankees with some good little league teams. Rather watch kids play then overpaid old men play.

In the old days an empty park = poorhouse. I watch YES network and they show ads for cheesy male "enhancement" products and shamWOW!, so where's the revenue from that network that we keep hearing about to offset the empties? Beer concessions? Yes, the new stadiums are awash in beer and food but that can't offset the losses at the gate. In the old days the security used to fill the seats in the late innings, why have they stopped?

In any case, I am a diehard baseball fan and I can't really afford to get to the game. And that's just one shame of it.

The law of supply and demand strikes again! If only the powers that be didn't try to break it so often, it just might work.

the people that populate the surrounding areas like soccer.............yanqui stadium!

"scrambling to fill the seats." Did lowering the price not occur to them?

Does copying and pasting a Times article count as journalism now?

This blog collects news stories from other sources as well as posts original content, and has for years. Must be a newbie if you're asking that question.