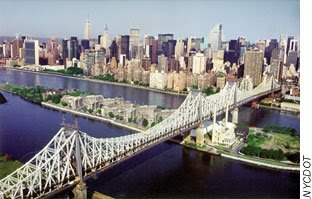 Fire officials say a construction worker has died while working on the Queensboro Bridge this afternoon.

Officials say the worker passed out after climbing up 100 feet of scaffolding on the Queens side of the bridge.

However, the Department of Transportation says the worker, a bridge painting inspector who worked for contractor AeCom, collapsed while walking on a platform.

A portion of the bridge was briefly closed to traffic.
Posted by Queens Crapper at 4:06 PM

sorry another construction worker died. my prays to the family. RIP...

damn, here's one that can't be blamed on me. I'll try harder next time.