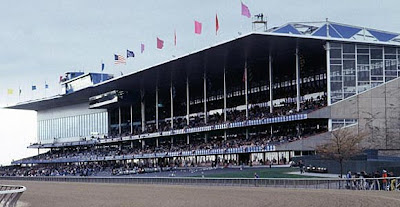 From a Daily News editorial:

The season ends today at Aqueduct, and with the finish of the ninth race should come the closure of the Queens horse track.

The place is a moribund vestige of a bygone era. It's time for New York to take it off life support and convert the enormous, underutilized real estate into a productive asset for the borough and city.

Desperate both for revenue and to prop up the racing industry, Albany has embarked again on a scheme to breathe life into Aqueduct by introducing computerized slot machines.

In doing so, Gov. Paterson and the Legislature are on a fool's errand that would deprive New York of a fantastic site for developing affordable housing, schools, recreation areas or other much needed projects.

Yes. Queens DEFINITELY needs more large scale development! Especially since all of the above named projects are hitting major snags. (That's sarcasm, folks.) P.S. Where is the "superb transportation?" The A train sucks and many times runs in shuttles.

Note to Daily News: NYRA is already selling off a lot of its property. Why doesn't the City buy it and build what it wants to on it?
Posted by Queens Crapper at 7:49 AM

Thanks Daily News for your creativity and imagination.

A park? Hell no, why waste resources on the dark skinned people and the immigrants. They will be happy with the Crap we give them.

Yet another example of a New York institution becomeing Bloomturd's whore.

Lets use our taxes to take care of our (unmet) services, or perhaps (gasp) improve our services.

How can NY consider itself a world capital if it always make choices like a third world backwater benefitting a small clique of wealthy developers while its citizens keep sliding backward?

Notice they don't mention a hospital, which is something needed before everything else. If you die en route to Jamaica Hospital, there's no time to enjoy housing, schools or parks.

How about we get rid of the race track all together and just leave some god damned open space.

The city had that opportunity more than 15 year ago when the Community Board proposed a plan for developing the land and changing the zoning from C8-1 to a mix of C2, R3 and R4. The city apparently preferred it to remain C8 and never acted on the plan.

I think we ought to leave all city planning decisions to the likes of the Daily News. Bloomberg and big development projects are the cure for everything. The News understands this.

Hey, I see a good site for a school. Beats the h*ll out of toxic alley in Maspeth.

Unless the Rockaway LIRR branch is revived, the Aqueduct site will remain an isolated backwater served by a single lengthy A train.

It is the largest development site in southern Queens, a huge rectangle sticking out of the monotonous grid.

Maybe a football field for the Jets. Like their first Queens home, the Aqueduct is also near an airport.

It will be a shame when Aqueduct is gone.