Everyone knew except Bloomberg (yeah, ok!) 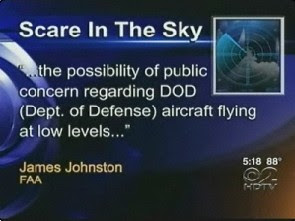 Federal officials knew that sending two fighter jets and Air Force One to buzz ground zero and Lady Liberty might set off nightmarish fears of a 9/11 replay, but they still ordered the photo-op kept secret from the public.

In a memo obtained by CBS 2 HD the Federal Aviation Administration's James Johnston said the agency was aware of "the possibility of public concern regarding DOD (Department of Defense) aircraft flying at low altitudes" in an around New York City. But they demanded total secrecy from the NYPD, the Secret Service, the FBI and even the mayor's office and threatened federal sanctions if the secret got out.

Hey, if the Mayor is going to contend that a report about contamination at a potential school site was "released" to the public because it was mailed to the CB5 district manager and available at SCA headquarters and therefore the community should have known about it, then I am going to hold him accountable for knowing about this faux pas and not doing anything about it. Top secret instructions are handed down by the feds and your lackeys get it but don't tell you? Stop playing stupid. We're not buying it.
Posted by Queens Crapper at 10:13 PM

This is a non-story.

Mayor Dumb-berg in a whining drone:

Using the heinous 2001 WTC attack to focus attention on himself is that asshole's cheapest shot yet!

Dump this baggage at the polls in November!

Why would we need a "financial expert" like Bloomberg...who couldn't spot the early warning signs of our economic slide...to "protect" our city for 4 more years?

To continue taking good care of his wealthy pals....certainly not the populace!

VOTE FOR ANYONE BUT HIM!

(Most are beginning to prefer Avella, a man of the people, as the wisest choice for mayor of ALL of NYC's people).

Yes i want Avella but i take thompson, anyone but Bloomberg, he is only for the rich and has destroyed the quality of life in this city.

Still would like to know what "passengers" were aboard AF1.
Sadly that doesn't seem a question the MSM wants to ask. Only Canada Free Press is asking that question. If you want an interesting perspective on the US I suggest you check out their website.

Maybe the plane will hit his helicopter next time.

Inspect away Congestion! The city should toughen inspections for medical, psychiatric and vehicle reasons to cut down the number of congestion. This way, we will also get the voters against congestion pricing, who live in Bayside and Staten Island, to move away. Free health care means psychiatric care for all those angry talk radio white males!