Things got a little nuts in Fresh Meadows recently 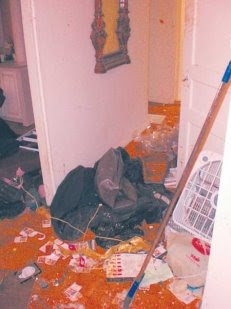 When Mr. Tratner returned to his apartment—he wasn’t able to get a flight out of London for 14 hours—he found a scene of utter destruction. Nearly all the contents of the apartment had been thrown to the floor. An antique marble gas lamp that had been in his family for generations had been broken into pieces, an antique clock destroyed. The living room sofa was in the bathtub. All the windows had been broken. The insides of the toilet had been ripped out and the apartment had flooded; the shower fixtures had also been yanked from the wall. Mr. Tratner’s computer had been destroyed. There was a metal antenna that had been driven into the hardwood floor, and the electrical outlets had been torn out. The gas stove had been dislodged. All the light fixtures had been shattered. And there was blood, tons of it, everywhere—smeared on the kitchen cabinets, the walls, the doors, the mattresses.

Who said life in Queens is boring? If this is what the guy's friends do to his place, imagine what his enemies might do?
Posted by Queens Crapper at 12:14 AM

How do we know this was a prank? I hope police verified that the blood was not human. Perhaps there is a body somewhere. I find this to be a frightening, not funny story.

I heard after an 86 year old woman called 311 she was savagely gand raped, her 20 cats were killed execution style, and god knows where her dog's other three legs are.

I called 311 to complain about the mayor and Christine Quinn sent two big lesbian women who beat me and tied me up and made my children watch "The crying game" and "brokeback mountain".

This looks like Queens after the work of 'Honest Joe' Crowley and the 'Bhoys from the Clubhouse'.

I just realized I left the Observer link out of this post. Sorry for the mistake. It has now been corrected.

Anonymous said...
This comment has been removed by the author.
Thursday, April 30, 2009

That link makes a big difference. I was wondering why you were so nonchalant about such an atrocity.