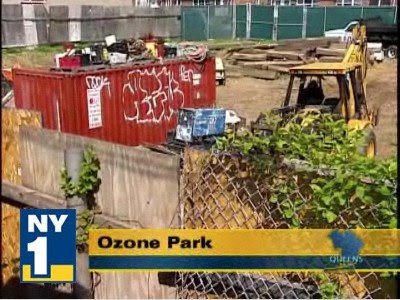 At the time of NY1's first report, a member of the DeMartino Family told the station that it was their property and they were not doing anything illegal. Not so, according to the Department of Buildings, which issued 17 violations on the lots for work without a permit and illegal use in a residential zone.

However, residents said the violations did nothing to change the situation, which had been ongoing for six years. That's when they called NY1 For You.

After the station called DOB, a hearing was held, which resulted in an order to padlock the site. The agency followed through, padlocking and posting the property.

NY1's most recent call to the DeMartino Family for comment has not been returned.

Now that the construction materials and vehicles have been cleared out, residents finally have some peace and quiet.

Anyone at NY1 want to take over this blog? I could use a vacation. Great job!
Posted by Queens Crapper at 12:53 AM

Very fortunate for the residents. Padlocked and all. Today,I finally called the office of T.Avello and explained that even though i'm not his constituent,i'm believing his office to help us out over here in aStoria. Houses were bought,gutted and basically abandoned, some owners not replying to hearings,violations,fines -- stop work orders are disregrded,some sites are routinely being stripped of plumbing and other fixtures. ALL i want done is simple--just like when your car gets booted,or towed.....please PADLOCK these properties and when the owners comply,they get the key.
and please give us advice on how to return our zoning to R2. This is totally ridiculous when these conversions involve attatched,row houses.

One down, a million to go.