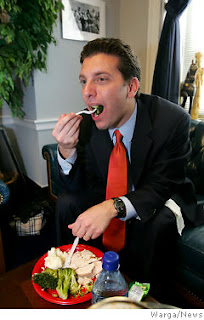 Just in from the department of not-so-surprising news: a study has found that young teenagers tend to be fatter when there are fast-food restaurants within one block of their schools.

The report found an increased obesity rate of at least 5.2 percent among teenagers at schools where fast-food outlets were a tenth of a mile — roughly one city block — or less away.

To remedy that, Eric N. Gioia, a city councilman from Queens, wants to stop fast-food restaurants from opening so close to the city’s schools.

Here's an idea: Why not teach the kids that fast food is bad and let them learn how to make healthy choices for themselves?
Posted by Queens Crapper at 12:08 AM

Yes, I endorse this Crappy idea. Teenagers are famous for listening to the wisdom of their elders and making good decisions.

They'll just walk a few blocks to get their fast food. Why doesn't this idiot create some intelligent legisltion for a change. Seems this guy has a food thing. I remember when he ate on a food stamp budget and bored the public with everything he ate. Like anyone cared. Dump this guy. He is useless and obviously has a lot of time on his hands. Is this the best idea he can come up with?

Just in from the department of not-so-surprising news: a study has found that young teenagers tend to be fatter when there are fast-food restaurants within one block of their schools.Does anyone really think that if you locate a Whole Foods, a salad bar, or any other "Stuff White People Like" vegan/organic/health food restaurants near a high school that the kids will change their eating habits?

Unfortunately, when you keep importing low IQ people into this country that don't know how to make proper decisions for themselves, you end up with busybodies like the "Doorman" who has to create foolish legislation to make it seem like he really gives a rat's arse. Welcome to Dystopia, New York City.....Where the Mandarins in the City Council decide what's right for the stupid masses......What's on American Idol?......Pass me the bucket of Popeye's chicken!!!

Wade Nichols weighs in, in typically confused fashion.
Let's see, poking fun at the obviousness of the news, then contradicting herself by implying that proximity of more healthy eateries wouldn't result in different consumption patterns. You got a degree in sociology, yet a garbled "argument" dissing organic White People is all you can muster?

At least the Doorman is eating healthy - broccoli and chicken with water to wash it down.

Good lord. Teach children the benefit of exercise and a healthy diet. You know that they will grow up to be adults who will work in an office or live in a home which will perhaps be within a tenth of a mile of a fast food joint some day. This is something which will be new and frightening to them! What will happen then? We regulate all Burger Kings to have mine fields installed in their parking lots to promote healthy eating habits? Please stop passing nanny state laws over every facet of society and treating people like they're morons.

What will he do with all the kids who hang out at the food court in the mall after school?

"Teenagers are famous for listening to the wisdom of their elders and making good decisions."

Then why send them to school or parent them at all? Do you not think that teens are weight-conscious?

We only need "choice" when it comes to killing the unborn.

What is it with these freaks who get elected to control government?

Once that gets too difficult, they think they have to control us instead?

Why are these council employees failing to investigating and controlling the closing of firehouses? The decimation of the police? The CHOICE of contaminated land for high school students? (Which is worse: obese HS students, or obese, and toxic chemically contaminated students?)

Why are these frivolous freaks so easily controlled by Weingarten's UFT commandos?

But, they cannot control the racist mouth of one of their own?

Why are these lazy morons not the least concerned that their master, the Commissar is seizing private property all over the city just so that he can fatten (get obese) his hidden bank accounts in Bermuda?

Why are they so easily for rent and sale to this Commissar who will toss them when they serve no more useful purpose?

Gioia, go back to your food stamps. You were far more interesting then, reciting your daily consumption.

Shut the door on the doorman!
Maybe Gioia should be in charge of putting condoms on everyone.
Seems like we put free condoms everywhere and AIDS is still on the rise. Why not just have
government food lines so they could give us what they think is right to eat. If you have nothing to say, keep your mouth shut! Maybe he should learn this for himself.

Wade Nichols weighs in, in typically confused fashion.I must be doing something right, I obviously rattled your cage, dimwit.

VERY VERY GOOD POINT. NOTICE THAT IN COMMUNITIES WHICH ARE BEING DESTORYED AND REPLACED (LIC WITH TOWER PEOPLE AND ASTORIA WITH ELMHURST) THE LOCAL POLS WILL TALK ABOUT ANYTHING THAT IS STUPID, AND NOTHING THAT IS USEFUL TO THE VERY REAL PROBLEMS IN THEIR COMMUNITY.

Unfortunately, when you keep importing low IQ people into this country that don't know how to make proper decisions for themselves...

Good point Wade, and people that do not know the traditions of civic participation and have a cultural bias to deferring to authority

A bed rock reason that the machine looooveeesss the ol immigrant.

Look up "To Tweed" from Gangs of NY posted serveral times in this blog.

lmao, like the food stamp remark! he was boring then and still is today. my kids aren't overweight and they eat fast food, so maybe it's more about how much crap you consume. i don't think anyone should be telling anyone how to eat, holy shit last time i checked it was freedom of choice.

Neil Cavuto interviewed Gioria on Monday. He appeared befuddled, inarticulate and thoroughly unable to defend his position. In essence he was a fool on a fool's mission.
It was a sight to behold. There may be a tape of the interview on fox news somewhere.

To our goverment: Federal, State, and Local
Leave us alone and stay the hell out of our business.

Frank Loyd Crap exposed exactly how the machine operates. He said it so well it is going to scare a pol or two. Frank, are you an insider? Did you work for one of these clowns or something?

can someone please photoshop a penis going into his mouth instead of that food to make this picture accurate?

"I must be doing something right, I obviously rattled your cage, dimwit."