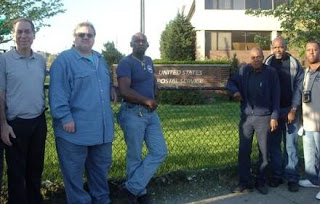 Currently, if a person mails a letter in Queens it gets sent to the Whitestone Processing and Distribution Center located at 20th Avenue and the Whitestone Expressway where employees perform all of the checks on the mail.

But, under the new plan, instead of being sent directly to the Whitestone facility, the mail would go to the Brooklyn plant where it would be cancelled, first passed and postmarked, and then sent back to the Whitestone facility via delivery truck, according to union officials. They believe the extra travel on the Van Wyck during rush hours will add on additional time to the mail service and will affect any cost saving measures.

Mark Sobel, President of the National Association of Letter Carriers in Flushing, said that his union’s jobs likely would not see any job cuts, but it would take longer for the letter carriers to get the mail, and it could even delay some mail by a day because of the increased time getting the letters to and from Brooklyn.
Posted by Queens Crapper at 12:39 AM

My mail has been sent /recieved very fast over the last few years.Don't fix what ain't broke.

Mailing to Queens from Queens has always been accomplished overnight. Imagine the benefits of express mail for the price of a postage stamp. I agree. If it ain't broke ,don't fix it!

Leave us alone. I have had mail delivered from Astoria to Forest Hills within the same day. I will never see such service with mail received from any of the other boroughs.

I dropped off a letter in the morning at Station "A" in Flushing and my friend in Bensonhurst received it in the late afternoon!

I'm surprised you are not trying to find a way to blame Bloomberg for this.

The Postal Service is losing over 25 MILLION dollars a day. Any company in its right mind would look to consolidate. In fact, any compnay in the private sector would be thought of a derelict for NOT taking action.

There are 3 major mail processing plants in the Triboro District. That's 3 set of very expensive machinery sitting there. THERE IS NO MAIL VOLUME!!!! They have to consolidate to save money, and they have to do it now!

650 thousand people have lost their jobs so far this year. The Postal Service is attempting to make these cost saving measures WITHOUT layoffs!

The delaying mail accusation doesnt hold water. The Postal Service has trucks moving through NYC traffic EVERYDAY now, and our overnight delivery (in the 3 boroughs) is over 96%.

Postal workers... Get the message! The Postal Service may not make payroll by the end of this year. GET ON BOARD and help the organization or there may not be any jobs to save...

ABSURD. LET'S DESTROY MORE OF OUR OZONE, WHY DON'T WE.

That's true, after all unions have shrunk to almost nothing today and the economy is doing so well.

Look at our booming housing markets, high employment, robust exports, strong dollar, low inflation, modest government debt--much better than it was during the 1950's and 60's when most labor was unionized.

Thank God we have strong business leaders at AIG, General Motors, Enron, Citibank and so many others to lead the fight against overbearing government, unionism and creeping socialism.

Greed on the part of corporate executives beholden to their "shareholders" is killing business, not unions.

The Postal workers of america and the american public are paying for the sins of upper Postal management who not to long ago took the better part of a 3 billion dollar surplus and spent it on machines the size of football fields in the belief that there would be Billions of pieces of mail for those huge machines to sort. Now that the mail stream, the bulk of which for years has been advertising, has dried up. Those overpriced machines sort a volume of mail that could have been sorted just as fast and more accurately by crews of clerks. Many clerk positions have been eliminated due to the very machines that now run at 25% of their capacity if that. It is like killing a flea with a two ton smart bomb dropped from a stealth fighter. Had not the Postal service hierarchy been blinded by the thoughts of bigger salaries and bonuses perhaps someone in the room might have wondered aloud what might happen if there were not enough mail volume to support the spending of Billions of dollars on gigantic machines. Machines that now sit mostly idle. Monuments to the shortsightedness and mismanagement displayed by the extremely over paid and underqualified group running the U.S.P.S.

Since taking on the title "Postal Service" they have done nothing but cut service. Delivery of the United States mail is a public service not a business. The public makes you or breaks you. And if they really wanted it to be a business they would have catered more to their customers needs. It is time that the government halts the waste by this bunch of buffoons. The integrity of the mail should be top priority. If not for the dedicated letter carriers, who on a daily basis rectify errors made by "automation", the Postal Service would have tanked years ago. Urge your local politicians to make the "Postal Service" show their cards. They are a quasi government institution and seem to forget that they are beholden to rules and regulations set forth by this country. They seem to think they can do whatever they want and just say "TOUGH!!!" There should be no profit made by those who think they owe the public nothing.