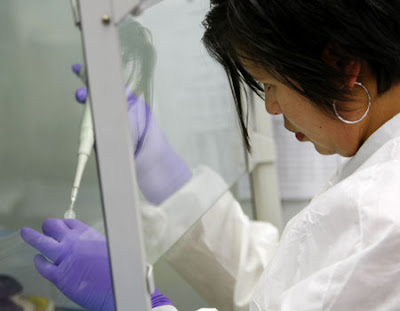 Coroner's Capt. John Kades says tests are being run on two bodies to see if swine flu was a factor in their deaths, but there is no confirmation that the disease killed them.

The Los Angeles Times reports on its Web site that both men's deaths were reported to the coroner's office on Monday.

Coroner's spokesman Craig Harvey told the paper that a Bellflower hospital reported the death of a 33-year-old Long Beach man who was brought in Saturday with symptoms resembling swine flu.

The other death was a 45-year-old La Mirada man who died April 22 at a Norwalk hospital.

The World Heath Organization has now confirmed person-to-person transmission of the swine flu virus in the United States.

Update: A baby in Texas is confirmed to have died from it.
Posted by Queens Crapper at 2:33 PM

I want more guest workers in my communities, right Vicky and Gery?

Everyday I come within 30 feet of the 40 or so Mexican day workers gathered on Northern Boulevard I pay close attention to see if anyone is sneezing or coughing.

If so I cross the street!

No sense taking any chances.

I might consider wearing a face mask on public transport.

It's great to see our city turned into a 3rd world town where infectious diseases, bed bugs
etc. are making a comeback!

At least when the cold war was still in full swing we only had to worry about nukes (which would have never been used anyway...we all know that now) and a few superpowers.

Why even bother to worry about terrorists with these new killer plagues on the uprise!

You can catch the swine flu if your in close contact with someone who has it. I don't think the day laborers that are here are carriers. But you do see asians in flushing walking around with masks for some time now, maybe they're smarter then us.

Why are we getting skittish around Mexicans? Why aren't we worried about Catholic school students--they were the first carriers, not day laborers. Or how about pointing the finger at Smithfield? If these big agro-businesses (thanks to NAFTA) didn't turn Mexican villages into mounds of pig feces, maybe the flu strain wouldn't have mutated. No, keep crossing the street when you see a Mexican. As for me, I'm more nervous about receiving Communion on Sunday.

It is amazing how the mexican goverment does'nt give two shits about their own people. How many people have to die there before they take real action on combating this? nOr is it that they hope to reduce the population? Either way I think it is a shame that they can do this to there own people. And as for the day laboerers, I wouldnt worry about them, they are here in america and have no intentions on going back home and that you can believe.

According to a New York Times story about a putative "first patient," a five-year old boy, the Mexicans think it came from here.

It's the old story, "Success has a thousand fathers, failure is an orphan."

Its about time we stop propping up the regime in Mexico by importing their excess population to US where they can earn money their own country can't find for them.

These are people draining economic vitality from our local economies by not only taking jobs from Americans, but taking cash and sending it out of the country.

Sooner or later this system will fall apart.

And that will happen only when the good burgers in Brooklyn Heights catch nasty things from their nannies.

Asians have been wearing masks for years since the SARS epidemic!

There doesn't seem to be an Asian connection anywhere for this particular disease as of yet.
They're carriers of other things.

By the way, those Mexican and Latino day laborers live in dorms where others might be infected with swine flu and take public transport to their pick up spots.

THE VIRUS CAN LIVE UP TO A MINIMUM OF 24 HOURS ON ANY HARD SURFACE AND ON SOFT SURFACES...LONGER!

It's been determined by medical experts that COUGHING and SNEEZING
does transmit swine flu!

Listen to the daily news reports!

Why the hell would anyone want to visit Mexico these days...what with the wholesale killing perpetrated by the drug lords and now the dangers of contracting swine flu?

Sadly, it looks like that beautiful country is about to go down the crapper soon.

I wouldn't be surprised if the US has ideas of trying to annex Mexico since a lot of our industry, attempting to avoid labor unions, have already moved down there in droves.

You mean like eventually creating "The United States of The Americas"?

Central and South America had best take note of this.

what? sneezing and coughing can spread the flu. they recommend that you cover your mouth when coughing and sneezing and it's better to cough in the arm instead of hands so you don't spread it, also to wash your hands. i don't know where you heard different, how else would everyone at prep caught it?